The Mermaid of Lake Norman 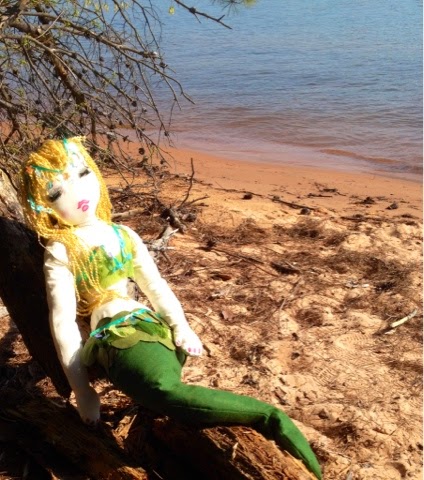 Despite all the doctor's appointments and illnesses running through the children, I was finally able to finish the custom life-sized mermaid doll for my very best client. "Life-sized" in this case means about 4 1/2 feet tall, a little taller than my 9-year-old. I was hoping to be finished with this doll ages ago, but with listing everything for eBay's Retro Event, which ends tomorrow, our teen having strep throat and then home another half day with stomach issues from the antibiotics, our youngest having a fever we worried was strep and home one day, I just wasn't able to finish. Then, my ever-helpful mother called and told my husband they were arriving Friday afternoon for a weekend visit, so I spent a couple days really deep cleaning the house trying to get rid of all the germs, shopping for extra food, and planning activities. Friday, however, we were sitting around waiting for them to arrive so we could have dinner when my mom called again and said they weren't coming. At least the house is really clean now, but it was a lot of extra work right at the most inconvenient time. 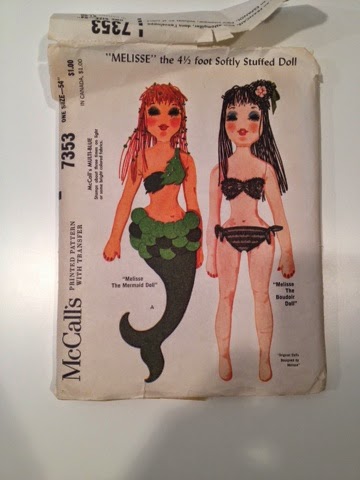 My client sent me the pattern and materials she wanted me to use for the mermaid. She picked out some beautiful notions and fabric. I was a bit worried when I saw the vintage pattern because there was no photo of the finished doll, only an illustration. Patterns like that always worry me because it means it's possible no one ever actually made the thing, so they often don't work as expected.

I got even more worried when I read the instructions and saw a little pillow is supposed to be inserted into the neck as a support. Sure enough, the head, when sewn as instructed in the pattern, falls backward completely, even before you put the heavy hair in. I had to think and experiment and undo the neck seam. I tried various types of stuffing, but finally had to insert wire into the head and neck to help support it. I needed the neck to be sturdy enough to hold the head up but still able to bend. I have a bale of vintage plastic coated wire, which I wanted to use because metal wire could discolor the fabric. Unfortunately that wire is quite thin, so I had to twist several strands into a thickness of about 1/4 inch diameter. I first made two thick wires and arranged them in an X shape at the nape of the neck. I sewed them in place under the hair. This worked well until I applied the hair, but then the head was falling over again, so I opened the neck back up and inserted another longer wire twist like a spine from the middle of the head to in between the shoulder blades. I sewed this on so the stitches are hidden under the hair and the back of the "seaweed" bra. Now the head, while still a little floppy, can be posed.


I know a few weeks ago I promised a tutorial on "wax printing" a doll face. That's the method I used for this doll. The pattern came with an iron-on transfer of the face. I didn't want to use it because of its age, first of all, and also because I promised my client I would trace the pattern so it didn't have to be cut and can be re-sold after use if desired. I traced the transfer on tracing paper, which you can buy at an art supplies store. Then I traced the other side of the image with dark pencil. Then I lay the pattern over the fabric and traced over the image on the tracing paper again with a pen. This transfers the graphite onto the fabric as if you were using carbon paper, of anyone else is also old enough to remember that stuff! If you don't want to use a commercial pattern just draw the image on the fabric with chalk or a pencil.


Once the image was transferred to the fabric, I colored it in using regular wax crayons from the children's art supply closet. For the cheeks and eyeshadow I colored using the side of a broken crayon gently to make it look blended like a powder. To set the wax, I placed old pattern tissue over the wax and ironed it on hot with no steam. This melts the wax and allows any excess to saturate the tissue. As I finished each section I moved the tissue to a clean section so I wouldn't transfer wax to the wrong place. If you don't have any old pattern tissue you can use thick white tissue paper, like gift wrap tissue. Just watch the temperature of the iron and don't use water or steam, which will disintegrate the tissue. This doll's fingernails are printed the same way as the face. After the doll was finished I glued some fake eyelashes over the wax printed ones for some extra depth. Whenever there are sales on cool false eyelashes, especially unusual Halloween ones, I stock up for use as doll lashes.

Since it was a beautiful, hot day today and "Melisse" the mermaid was finished, we took her out on the boat and posed her on an island in Lake Norman for a photo shoot. I had the doll in a trash bag so she wouldn't get wet or dirty, and our five year old asked if we were going out on the lake to "throw out our mermaid trash". Then he wanted to know if we were going to fish for more mermaids! After the shoot we had fun wading (really swimming in the case of the youngest who got soaking wet). We are trying to enjoy the lovely weather because next week it's supposed to frost again. 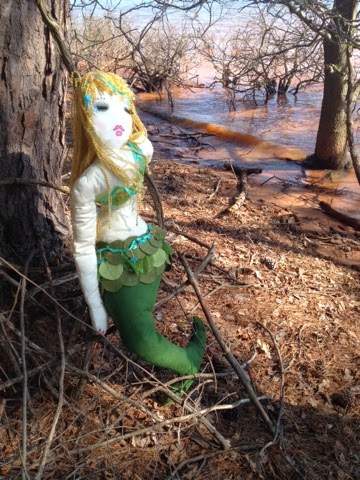 You know, I really think before any politicians are allowed to vote on climate or environmental issues they should have to grow a public garden and show everyone how well their plants do. Besides the mermaid and everything else this week I worked in the garden a lot, planting strawberries, blueberries, and azaleas, and caring for my rhubarb and kale which, in danger two weeks ago from freezing weather, are now trying to bolt since the temperatures have gotten up to almost 90 degrees! It's just insane. 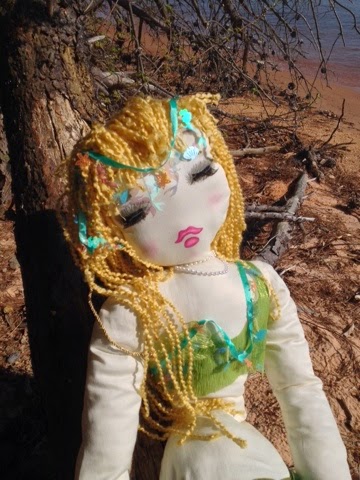 Today a huge box of Ginger, Pam, and Lucy dolls I ordered arrived and I'm going to be working on getting those restored and listed this week. Make sure to watch for them in the store: http://stores.ebay.com/atelier-mandaline. 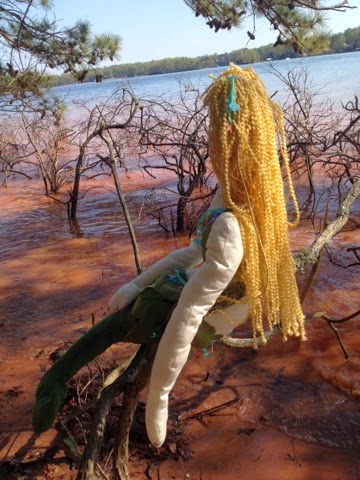 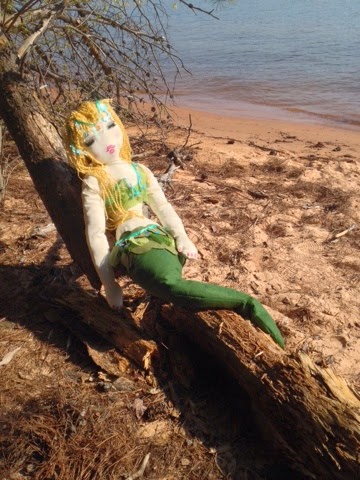 Posted by Mandaline at 6:17 PM