A couple months ago I think I mentioned I had finished another version of my Edith doll. She is my rendition of the antique Lenci doll used in The Lonely Doll books by Dare Wright. My first Edith was made of 100% felt and disk-jointed like the old Lenci dolls. I finished this doll in November and expected to sell it for Christmas, but I had some unexpected complications. My grandmother came to stay and became very frail. I spent the weeks before Christmas caring for her two days a week and wasn't able to get the doll's clothes finished.

Even if I could have finished the doll before Christmas, I would definitely not have had time to finish the entire project. I really wanted to try some photos like those in the original book. I have been fascinated by Dare Wright's photos since I was about 10 years old. After I discovered these books I remember my friend, Elaine, and I tried to replicate them using my Barbie Dream Store and dolls. The photos were cute, but nothing like Wright's.

Of course, Dare Wright was a professional photographer with a career that spanned the globe. It seems like she had a special talent with her dolls and bears. Even the new book starring Edith and using the same doll, just doesn't capture that spark of life Wright could create with her camera. I wasn't sure if I should even try to take more photos. I did take some of my first Edith doll, which you can see in my Chasing the Lonely Doll post. Those weren't what I'd hoped. This year for Christmas, though, Jerry gave me a new iPhone and I have been going crazy with the Instagram and Photoshop Express aps. I was able to get a vintage look in color and black and white, and I was pretty happy with the personality the doll has in them.

I also revised the doll a bit this time. My first doll was smaller; only about 16 inches. I redrew my pattern so the doll is 18 inches. Now she can wear most of the doll clothes made now. I also tried different disk joints, made of Masonite and metal rather than plastic. These joints are largely unavailable now, but I found some in a doll shop in Michigan this summer. The joints were still too loose, so I also added internal stringing. The stringing tightens the joints and allows the doll to stand alone and hold more poses.

I plan to keep making felt dolls and trying to improve mine. I hope someday to perfect both my dolls and my photos as Madame Lenci and Dare Wright did.

Posted by Mandaline at 4:21 PM No comments: Links to this post

The Journey is the Destination 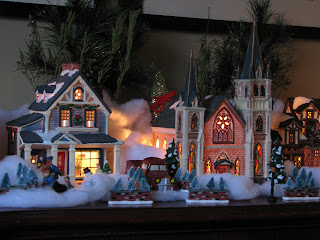 Years ago, as a new mother, I bought a little Christmas village in a box for my oldest son. He was about 2 years old at the time and he adored Christmas villages. I had always felt they were somewhat tacky, but I wanted him to enjoy the holiday. Our little village had a church and two houses. It came complete in the box from Kmart. We unpacked the houses and the tiny bottle-brush trees, street lamps, lights, and tiny citizens. My son had a ball setting it all up and was suitably impressed when we lit it. So, setting up the village on the dining room sideboard became our Christmas tradition.

A few years later during our move to a new house, the original village church was broken and had to be replaced. A year or two after that I decided to use a sheet of quilt batting as the "snow". It seemed like a great idea until the cat, now late and lamented, jumped up to investigate, grabbing the edge of the batting with her claws. We rushed into the room after hearing a fantastic crash to see our village scattered everywhere! After that incident many buildings and people had to be replaced. My mother found out about my son's love for villages and scoured the after-Christmas sales for deals. So over the years our village grew to completely cover the sideboard.

We have it down pat now, so it hardly takes any time at all to set up. Maybe the buildings are all different sizes due to the various replacements over the years. Maybe some of the people are actually too large to fit through any of the doors. Maybe several of them are missing limbs after the cat tragedy. So what? The town's Christmas tree is made of glittered construction paper, a Kindergarten project that was the pride and joy of my now 7th-grade son. The wooded hills in the background are sticks and leaves pushed into Styrofoam blocks and covered with fiberfill, devised to hide the cords for the lights. Now, each year when we light the village for the first time it truly feels like Christmas. And over the years I think I've come to love it more than my children!

When it's dark outside and the village is lit I can almost see the Ohio town of my childhood. It is the same sort of idyllic-looking village of Victorian architecture, wrapped around the a lake shore, often blanketed with snow at Christmas-time. When I was a little girl they used to play Christmas carols on loudspeakers so they echoed throughout the down-town streets and wrap the lighthouse with Christmas lights. I also see the many towns and villages scattered through the Blue Ridge mountains from North Carolina through Virginia and West Virginia and Ohio. This is because for more than a quarter-century my family drove home each year for Christmas. When we first started the trip in the early 1980s we had just moved to North Carolina. It took forever on winding mountain highways, 14-16 hours. One year it took us 22 hours because of a traffic jam. We took a crazy, tilt-a-whirl tour through tiny towns like Mount Airy and Fancy Gap. The houses near Charleston, West Virginia seemed to cling like barnacles to the sides of cliffs. Nowadays, the new highways cut a great deal of time off trip. You can sometimes make it 10 hours. But you still pass many of those rural villages. The snowy, stacked mountain towns, all lit and decorated, come back to me when I see our village.

Who would of thought that dreaded drive would ever be missed? But I do miss it. A few years ago my grandparents, aged 90 and 88, decided to spend the winter on the Texas shore. We spent our Christmas here. After so many years of wishing we could stay home for Christmas it seemed very quiet. Yes, we didn't have to sleep on bunk beds in the basement, but where were all the crowds of cousins and old friends? Christmas lights aren't half as festive when it's 75 degrees. And crazily enough, I actually missed the trip. I miss the mountains passing outside my windows, the sleeping towns covered in snow, the truck stops and landmarks, the scratchy Christmas carols on static radio stations.

My grandfather died shortly after his second Texas Christmas. The day before he'd gotten a speeding ticket driving home from their condo! My grandmother decided to come down here for Christmas and spent two holidays here. But this year when she came her visit was cut short. She became increasingly frail and unable to do things for herself and finally began having hallucinations. The doctors say she has Parkinson's with dementia and told us sending her home would help. So we took her back and the hallucinations did cease. But when I talked to her on the phone yesterday she was nearly in tears because she can't remember things she used to know.

I would give anything now to be able to turn back the clock to the holidays of my youth, when all my relatives would gather and my grandparents were well enough to host 40+ people in their house for Christmas. Even with the drive and the fights with my siblings over who would sit where and who would sleep there. Even sharing one shower with all those people. But I also need to remember to enjoy the holidays we have now, when our children are small and it is a wondrous time for them. I guess the greatest lesson I've ever gotten from the holiday season is that you have to enjoy the journey. Because in the end, life is the journey, and the journey is the destination.

Happy Holidays to you all.

Posted by Mandaline at 10:39 AM No comments: Links to this post