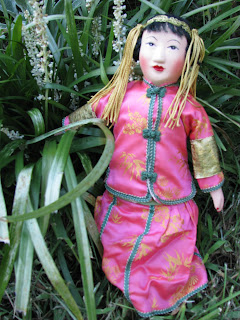 This week, despite all the travel and travail associated with trying to sell our house and deal with our son's ongoing surgical and therapy appointments, I did manage to do a small restoration project. I found this Chinese character doll in a box of badly damaged pre-1950 dolls. I think she was probably originally the "bride" character, made in Hong Kong between the 1930s and 1950s. If so, she is missing her original bridal headdress. This would have been a tall headdress in red and gold, stamped all over with characters. She had a large hole in the sleeve of her Mandarin-collar jacket, but was otherwise in excellent shape.
I started the restoration by cleaning her gently with a cotton ball dipped in water and dish-soap mixture. I then "fixed" her sleeve by sewing on bands of gold ribbon to look like stripes. I created a new headdress with a piece of gold trim, slightly elastic so it is able to slide on and off, and fringe ornaments that hang down over her hair.
The traditional Chinese wedding headgear can be quite elaborate or very simple, as in the red veil I wear in the photo above. That photo of Jerry and me in China was taken in the home of a family in Old Beijing who open their homes to foreigners in a "Hutong Tour" or "back-alley" tour. The house is made of several detached rooms arranged around a central courtyard. Large doors open each room to the courtyard so the effect is of being in a giant, adult-sized doll's house. It is practical, as the air is able to circulate during summer, when the temperatures reach well over 100 degrees. The room where we sit is the newly-wed's room. Each member of the family who is married uses that room, with its traditional red decor and lucky "double happiness" or chongqing character in the window, for a certain period of time after the wedding. Tourists may sit on the marriage bed and wear the bride's red veil and the groom's red scarf for photos.
The doll's hair is styled in braided buns over her ears, which seems to be the preferred bridal style. In China these braids are called "pigtails" and it is considered very beautiful if they are perfectly symmetrical. When we adopted our daughter the guide told us they will sometimes have trouble with older orphanage workers using boards to flatten the backs of the girls' heads in order to display pigtails more becomingly! Our daughter's head was certainly very flat, but I think it was due to time in the crib rather than boarding. She is very beautiful, though, even if now her head is no longer flat and her pigtails aren't perfectly symmetrical!
When finished, this doll has such wonderful personality I named her "Lotus Flower" because of her pink and gold dress. Maybe I should have chosen cherry blossom, for the pattern of cherry blossoms and bamboo woven in the brocade, but that seemed too Japanese. She is very lovely, and displays beautifully and is very photogenic. A real gem for any collection! I am happy to feel like I accomplished something creative this week!
Posted by Mandaline at 7:41 AM No comments: Links to this post 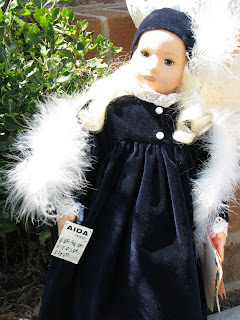 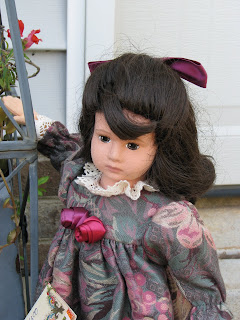 If you've been following my blog, you know I haven't written anything since the homestager came and we painted our entire house. We also cleaned out our garage, moved a ton of stuff into storage, traveled out of state to consult our son's surgical team, and had lots of showings. One rather inconvenient one on Wednesday, when I had scheduled my eBay auctions to end Tuesday thinking it would be slow during the week,. So I was cleaning like mad, driving around with all our pets and kids in the car to keep the house clear, mailing packages, one to Australia so it required a trip to the post office...and then the people chose a different house. AGH! Hopefully the house will sell soon, because besides all that I've had to clean like crazy!
One basic tenant of the homestager's manifesto is no collections, with a specific ban on DOLL collections! If her accent hadn't already told me the woman wasn't Southern, that would have! Growing up here, I can't think of one friend whose mother didn't have a doll collection. This was typically displayed in the best, usually the front, room along with the family Bible. One mother did keep her dolls in their boxes in the linen closet but she was the exception. Old-fashioned jointed bears were in back then too, and one neighbor had her fireplace so filled with them I guess they must never have lit a fire! So I started collecting dolls when I was around 12 and continued until I lost interest in my late teens.
I do still love dolls, and occasionally I buy them to resell. This is occasionally pretty hard for me, as it is in the case of these two Lenci dolls. The Lenci doll company was famous for their stunningly beautiful, exquisitely detailed pressed felt dolls. I have started trying to make Lenci-style dolls and bought these to study them in person. These dolls were also made in years that were special to me, then years when I worked in Italy and got married. But given our current situation, with so little room in our home and so far no offers despite all our showings, I think it's time to let go of them. I did do a slight amount of restoration on Mimi, as I glued the dislodged feather and comb back on her hat.
These dolls are infinitely poseable and photogenic, just like the famous Lenci doll, Edith, from the Lonely Doll books. They are so much fun to take pictures of and would probably be as durable and playable for children as they were back in the 1920s. Madame Lenci did design her first dolls after being unable to find an unbreakable doll for her own daughter, Anili. I hope someday to make dolls just as wonderful as these. 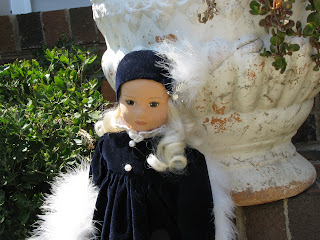 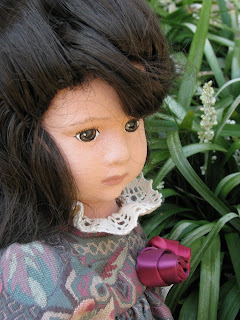