My husband, Jerry, celebrated his birthday this weekend. I'm afraid it wasn't the biggest of events. We don't really know anyone here to invite to a party. Our teen was out of town on a school trip, so we couldn't go out alone. We had a date night on Monday before our teen left, but I felt like I should try to do something at home to make the day special. I decided on a big birthday feast.

Birthday meals are tricky when you're dieting. If you read this blog often you'll know I'm always trying to lose weight. Low carbohydrate plans like Atkins work best for me. It took me many years to figure this out. I made myself really sick following low calorie, low fat plans before I realized they aren't ever going to work for me. I read recently that researchers identified a genetic variation relating to heart health. If you have this particular gene variation low fat plans are healthiest for you, but if you don't (and I definitely don't!) they are quite dangerous. I feel sorry for Jerry, though, always having to eat my traditional Scandinavian fish-heavy, high fat cuisine and rarely getting to enjoy bread or cake. I was determined not to let my diet ruin his day. I didn't want to ruin my diet, either, though. I've lost so much weight now people are starting to comment on it and I'm going to have to make another trip to buy new clothes.

I used all my Atkins cookbooks and scoured Pinterest for ideas, and eventually planned a delicious and still decadent and celebratory meal. We started with Surf and Turf. I made bacon-wrapped Filet Mignon with lobster tails and Jerry grilled them for me outdoors. While he was manning the grill, I prepared salads with Ranch dressing and Lemon and Herb Browned Butter for the lobster. The Ranch dressing recipe, which is called "Creamy Italian" from Atkins, can be found here: http://mandalineartfulliving.blogspot.com/2013/11/the-companion-and-other-tales.html.

The recipe for the butter is as follows:

Melt butter over medium heat. Stir in all ingredients until blended. Lower heat to lowest setting and simmer until butter is lightly browned, stirring occasionally, about 15-20 minutes. Serve in dipping bowls on the side or pour over grilled lobster before serving.

Earlier in the day I made a reduced-carb Nutella Marble Cheesecake. This is almost, but not quite sugar-free. I thought we could allow for a tiny bit of indulgence on a birthday! The sugar in the cake comes from the Nutella, so if you want a truly sugar-free cake look at my Pinterest Recipes board or search Pinterest for DIY Nutella and make yours with Monk Fruit sweetener, Stevia, etc.

This cake is actually better the longer it is chilled. It gets more dense and moist and gooey the longer it sits. Next time I will make it the day before. That might be soon; it's so good Jerry asked to have it again for our anniversary in a couple months! 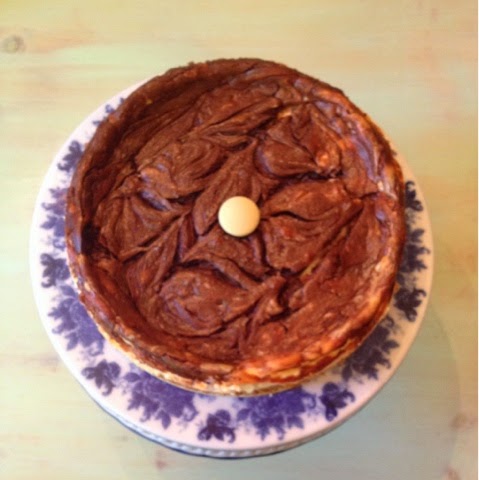 Preheat oven to 350 degrees. Chop the nuts finely in a food processor. Add sweetener to taste. Monk Fruit is sweeter than sugar, so add it a tablespoon at a time and taste after blending until you get the level of sweetness you like. Add the softened butter and pulse until blended throughout. The mixture should resemble soft crumbs. Butter a springform pan and press the nut mixture into the bottom of the pan. Bake 10 minutes and set aside to cool.

Combine cream cheese, butter, eggs, and 1/4 cup cream in a mixer and blend until smooth. Add Monk Fruit sweetener 1/4 cup at a time until the taste is pleasing to you. When the crust has completely cooled add this mixture to the springform pan, reserving 1/3 cup. Now add the 1/4 cup Nutella and 1 TBSP cream to the reserved cream cheese mixture and blend until smooth. Top the cream cheese mixture with the Nutella mixture in the springform pan. To make the marble top, place a dollop (1 TBSP) Nutella on top of the mixture, in the center of the cake. Draw a butter knife through the Nutella, first horizontally, then vertically, so it mixes a bit into the cake. It will make a marbled pattern. Bake for 35 minutes at 350 degrees. The edges of the cake will be set and pulling away from the sides of the pan and the top will be puffed but still a bit jiggly when the cake is done. Cool cake on a wire rack until completely cool. Chill in refrigerator at least 3 hours, but overnight is preferred. The longer you chill the cake, the gooier it will get! To serve, carefully loosen the cake around the edges by running the blade of a butter knife all around the edge of the cake. Gently unlock the spring and remove the outside ring of the pan. Garnish by pressing a pretty chocolate truffle into the center of the cake.

I'm really glad Jerry enjoyed his feast, because the rest of the weekend was pretty mundane. I had until midnight Saturday to list free on eBay, and I listed all day, right up until midnight! Since we moved here a year and a half ago, our son has gone from wearing boys' size 14 clothes to wearing a men's size Large. Yes, you may feel very sorry for me now! I have tons of clothing to sell. Check my store, especially if you have a teen boy to dress: http://stores.ebay.com/atelier-mandaline. The size 14 clothing has been worn the most, but he blew through the 16s and 18s so fast they were barely used!


We did get out on the lake yesterday for a while since it was a gorgeous day. We motored out to Terrell where we could see Little Mountain, and Jerry commented it's amazing to see the lake and a mountain at the same time. Then we stopped on an island to swim and wade for a while. I think it was a nice way to spend a birthday. I'm partial to boating, though. The smells: water, fish, mold, gasoline, are like home to me, and I love the feel of the wind on my face and the cold water on my skin. I hope Jerry enjoyed it as much as I did.