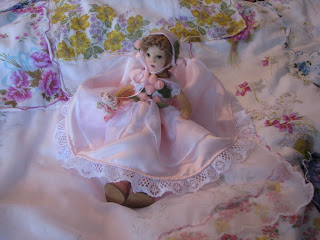 I spent my Sunday morning driving 40 minutes (one way!) to the pediatrician with my feverish daughter. I was lured by the possibility of strep throat suggested by the nurse, only to get there and have them, without even doing a throat culture, tell me a fever virus is going around and she should be well soon! Sometimes I think if you have 2 or 3 kids and can pass an IQ test you should get a license to practice pediatrics! So I didn't do anything more artistic today than shampoo the carpets, color my roots, and help my son with his grasslands biome. A biome seems to be what we called a diorama in my long-ago school days.

I did want to continue the Everything Old blog from the other day with an example of the first small doll made with the small mold shown in that blog. I named her Evangeline. I was reading Madame Tussad by Michelle Moran at the time and I suppose I was influenced! That's a good book, by the way. It really makes you think about the revolution at all costs idea making the rounds since the Arab Spring. I'm not saying those regimes don't need to be overthrown; just that some thought should go into what will replace them.

Evangeline was made from an old headless doll body and wig, probably dating to the 1940s or 50s. It was almost certainly a Lenci copy from a competitor and, judging from the shoes, meant to look like a French Revolution era lady. She's sitting on a quilt I made my daughter from vintage hankercheifs, probably from the same decade as the doll body.

I pressed and painted the head and attached it to the body. I made a very detailed gown of pink bridal satin and organza and I was quite happy with the result. The only disappointment to me was the head. Since a broken turning mechanism was poking out of the neck I was unable to attach a new one and so had to sew the head on as a fixed head. I had my engineer husband try to figure out a way to make it turn, but there just was no way to do it without tearing open the body, and I just really didn't want to do that!

I have only one real reference to France, though I do really enjoy Mireille Guilliano's books. I also waited in a security line at the airport while on my way home from Italy, but that was just a connecting flight and I spent my time in the Paris airport sleeping on a bench! I must say, the Air France flight had the best food I've ever had on a plane!

I visited Paris in 1993 and was there to celebrate the dawn of 1994 on New Year's Eve on the Champs Elysee. It was the best New Year's ever, but then I had the worst year of my life! My impressions of Paris were of gray cobbles winding between tall buildings crowned by vine-laden balconies. I remember green shuttered windows and giant claw-foot tubs, whores sitting naked in windows, and one fabulous book store. We weren't staying in the best part of town!

I tried, making Evangeline, to capture the Paris I remember, quirky and maybe a bit run down, but still utterly refined and beautiful. Here in the South they say being too polished is a sign you're trying too hard. The true gentry let themselves and their properties age a bit more naturally and gracefully. I think this is an essentially French idea, and I tried to capture that with Evangeline.
Posted by Mandaline at 7:06 PM