Angels and Babies, What More Could You Want?


Every so often I open a straightforward-looking box of dolls and find a treasure, or at least, a really rare and special doll. This happened twice recently. First, I bought a big lot of dolls and found one I've never seen before. She had what appeared to be the Posie or Saucy Walker body by Ideal, but her head was vinyl and marked "W.J. Wilson". Her back was marked "190" and "Made in the USA". She was 20 inches tall. I didn't know what to make of her. My extensive research brought up a one line entry in a doll blog stating this was the "Christmas Angel" doll sold annually and exclusively by the J.W. Robinson department store in Los Angeles, California. I've never found a photo of this doll anywhere, so I don't know if she was dressed like an angel or what. She appears to have been a walker doll, but she no longer walks. She was also a cryer, but her crying box is broken. So it seems like she was designed as a baby doll for a little girl, kind of odd if she was an angel.


Angel needed lots of work, so I decided to think on how to dress her while I fixed her up. I do have replacement doll cryer boxes in my studio but they are too large to fit inside the arm and leg holes of the doll, so replacing the box would require splitting her in half. I didn't want to risk that because if something went wrong I knew I'd never find replacement parts for this girl! Angel had messy, frizzy hair and little seam splits all over the place as well as leg splits. I fixed all her splits and set her hair, and then, about to "lock in" her curls with hot water, I set her on the counter while I went for the tea kettle. Well, she chose that moment to dive off the counter and re-split two seams! So after her hair was set she had to go back for epoxy. Too bad, because I would have liked to finish her for Christmas.


Once the drama was over and the splits were all repaired I decided how to dress Angel. I decided to kind of go the middle ground between girl and angel with a beautiful Marion Sipe heirloom sewn dress which I think was meant for a real baby. I belted it with a sash and it looked so much like a Santa Lucia gown I couldn't resist making a little crown of flowers for her to wear on her curls (no candles, though). I added vintage taffeta panties and unused vintage replacement shoes. 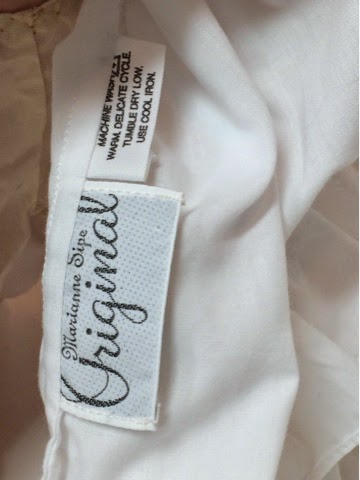 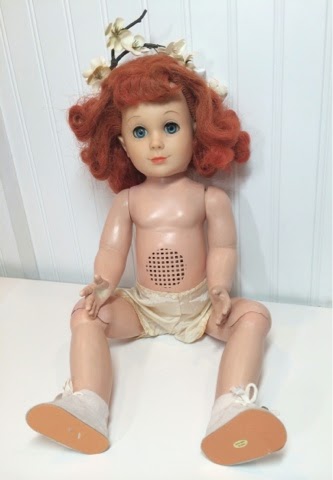 Thinking about how much the doll resembles Ideal's Posie, I remembered Posie, who later became Saucy Walker, was first introduced as a praying doll. I found if you bend Angel's knees and place her hands together with a clear silicone band she will stay in the prayer pose and balances very well. She'd make an adorable Christmas display!


Angel can also stand and sit alone and her knees bend. She's a very nice example of a classic hard plastic girl doll from the 1950s. I was reminded of our recent viewing of the original Miracle on 34th Street at Christmas time. We had to explain a central element of the plot to our children: the fact that department stores used to procure and sell their own exclusive merchandise. They've never lived in a world where every store didn't carry the exact same brands and toys as every other store! I guess some department stores do still sell their own clothing brands, and maybe they still make a toy or two at Christmas time. I'm thinking of the Belk stores here in the South that used to sell "Belkie" stuffed bears at Christmas. I have no idea whether they still do. It's too bad I didn't save my childhood Belkies; they'll probably be hard to find in 60 years! Angel is so unusual she sold within an hour of my listing her, and there's no telling if I'll ever find another.


Another recent rare find is a crawling Vicma baby doll from, I believe, the 1960s. Where this hard to find Spanish baby came from I have no idea. She was in a box with very normal American 1960s and 70s dolls. She's welcome in my store, though, because she's just beautiful!


Baby Vicma just needed a little cleaning up and she was ready to go. Unfortunately her crawling motor no longer works. The palms of her little hands are scuffed up from crawling, so she was clearly a loved and played with doll. Otherwise she has only a little spot under her chin. You can manually move her legs to make her legs and arms go in a crawling motion, kind of like a walking doll. Her head is jointed so you can turn it as well. She's rare enough to be worth adding to a collection, but she'd also be a cute play doll. Look for her and many more in my store: Atelier Mandaline.

Posted by Mandaline at 6:58 PM