Margaret, Down the Rabbit Hole


I may or may not have mentioned in my last post that we stopped at a thrift store on the way home from the beach Monday and I bought a bag of doll clothes that contained a very rare Madame Alexander dress. When I picked up the bag I saw a bit of a pinked seam, finished with pinking shears rather than stitching, and I thought it might be by Alexander. Pinked seams and square silver snaps are hallmarks of Madame Alexander's work. If an untagged piece has both, chances are it's an Alexander. 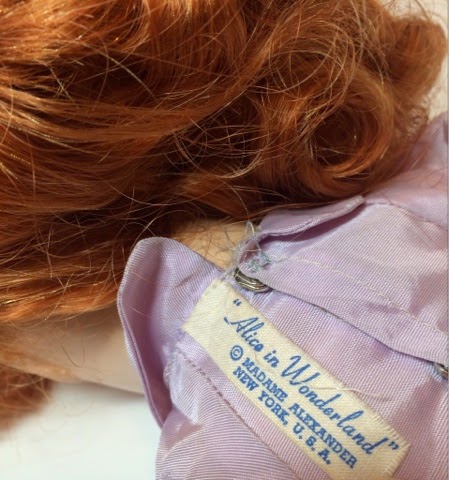 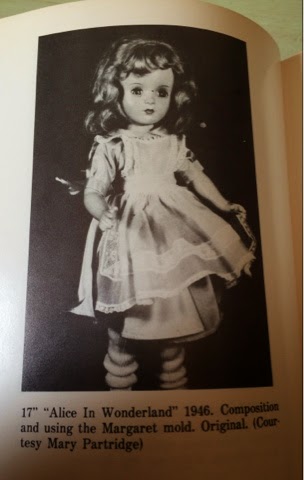 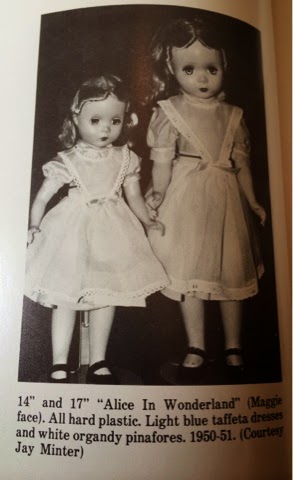 This dress, however, is tagged, as I found to my great joy, and it's not an easy one to find. This is the taffeta Alice in Wonderland dress used on the 17 inch composition Margaret of 1946 and some of the hard plastic Maggies in 1950 and 51. Still rare but more commonly seen is the 14 inch hard plastic Margaret wearing a blue dress with white piping trim and ruffled sleeves. The dress was originally light blue but has faded to lavender so evenly it's hard to tell that wasn't the original color. Amazingly, the very same night I got online to see if I could find a doll to match the dress and within just a few hours of arriving home I'd ordered and paid for her! This is just one of those dolls who are fated!

This Margaret doll is the 17 inch but she's hard plastic rather than composition. Her wig sure looked like the strawberry blond, or light red, mohair Alice wig, so it's possible she was originally Alice. Her wig had unfortunately become matted, had glue in it, had lost most of its hair, and was seated funnily on her head as if it had been re-glued. I really wanted to save the wig and I tried to add human hair to enhance its fullness but I just couldn't get it to look right. I looked through my wig stash and found the closest possible to the original Alice-Margaret color and style. I know Alice is always blond now, but that's never stated in the books as far as I can see. I think it's a "Disney-fication". I was explaining that phenomenon to my daughter recently when my daughter was wondering why my Honey Cinderella doll was wearing a pink, rather than blue, dress. I decided to adhere to Madame Alexander's original vision for her Alice doll.


I found a beautifully-sewn pinafore in the bag of clothing. It definitely isn't the Madame Alexander organdy pinafore original to the dress and I think it's almost too well made to be a factory piece. I wonder if the organdy pinafore fell apart and the mother made this one to replace it. I had to move the hidden button closure over to tighten the waist, however, so perhaps it was meant for another doll. It's the perfect length and style for Alice, though! 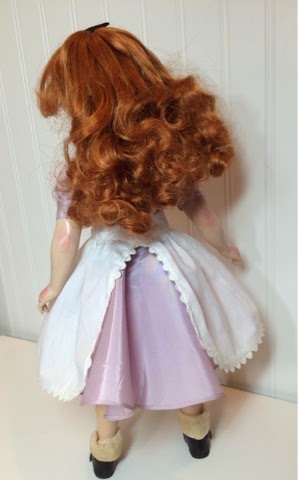 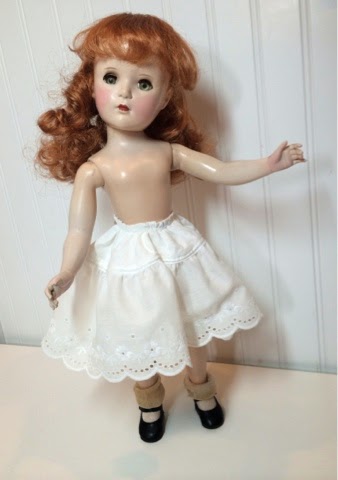 The Margaret doll came wearing Mommy-made pantaloons and an eyelet slip, so I kept those on her. I added vintage rayon socks and black shoes, and of course the "Alice band" ribbon headband. All together she's a really lovely classic Alice, instantly recognizable I think, even without her  Disney blue dress and blond hair.


It was clear upon inspection that Margaret had a restoration at some point in the past. Parts of this were skillfully done. There is a nearly invisible repair inside the hip socket. I can see the restorer painted over scraping in the joints but it has started to scrape again. You probably remember my position on this issue as stated in my last post. I just don't see the point in painting something that's just going to scrape all up again. I did give Margaret new stringing. Her knee blush was present but her hand blush and her lower arms in general were faded from sunlight so I blushed those. I refreshed her cheek blush and painted the nick in her eyelid.

I was quite dismayed to find a crack in the top of Margaret's head when I removed her original wig. In fact, it was more like a deliberate cut, as though the previous restorer had been thinking of adding a pate inside her head such as those used for porcelain dolls. They only cut about an inch and a half and then stopped. Then they glued and taped the cut place to stabilize the plastic. I would not have paid what I did for this doll if I'd known about that, but I can't blame the seller since you have to take the wig off to see it. It is stable, not near the eyes or head bar. You can't feel anything and you can't see the cut under the wig, so I'm certain it won't affect the doll.


It so happens I've been planning a book and doll Alice in Wonderland set. I was going to use a Kimberly doll, but when I found the already made dress I listed Kimberly in her original 1980s Hang Ten clothes. I had finished the Alice accessories already, though: a box with a little cake inside that says "Eat Me" and a little bottle marked "Drink Me". These were cosmetic jars and when they were empty I cleaned them and scrubbed the lettering off them and painted the words on with oil paint. The cake is a puzzle eraser. I think this set is just too cute. I had a wonderful time taking the photos!


I'm glad something went well today because not much else has. We got eaten up by sand fleas at the beach, which you wouldn't expect this time of year. It was extraordinarily hot. My daughter, usually my well-behaved child, has been horrible lately and we had to go in for a conference with her teacher. My peas love the cold frame and have grown to about 6 feet and are just setting blooms, but now snow is forecast for tomorrow. So, I went out and tried to put the peas inside the frame, but when I removed them from the trellis the stems all got bent and now I'm afraid they're going to die.

Everything about this house is just so frustrating. I feel like for every step forward I take I go  back ten. Moles dug up my beautiful stone garden path, which I guess is just as well since I can't get anything to grow over there anyway. We still don't have a dishwasher, since everything I want in the kitchen is, for one reason or another, apparently impossible. Now the old dishwasher, which has water trapped in the pipe, is starting to stink and I don't know how to remove a dishwasher so I can take it to the dump. I have asked for help in this area but my pleas fell on deaf ears. So, now my sister is coming to visit and my house stinks... just a crummy week for the most part! I hope next week will be better. You can find this doll and many more in my store, so please check: http://stores.ebay.com/atelier-mandaline.

Have a very happy Halloween!

Posted by Mandaline at 2:11 PM