Longtime readers of this blog might remember the 1920s-1930s boudoir fashion doll I picked up in Michigan several years ago. She was a mess. Someone had glued fake fur to her head like a hat. Her clothing was original but mostly falling apart. She'd obviously lost a hat  that was original, because she had mohair glued mostly around the hairline under the fur hair.

These dolls very commonly wore hats or bonnets that were pinned or glued on, so it's very common to see them with hair only around the hairline and none on the crown of the head. If you find one missing her hat she nearly always has her composition all torn up on the sides of her neck where it was damaged as the hat and hair were pulled away.


I bought this doll thinking to restore her and add her to my collection. My personal passion is for the dolls of the early 20th century, from the 1900s to the 1940s or so. I made a new mohair wig and planned a hat for her. I had some idea of re-making her original dress. However, just as the proverbial carpenter's wife has no furniture or cupboards and the fisherman's wife no fish, I never seem to get the time to finish dolls for me. Poor Flapper Gal has just been lying in a box for years.

A couple nights ago, however, I got an email through my blog from a customer who wanted a doll to fit into an antique dress she'd purchased. I measured all the dolls in my store and didn't have anything. The doll in question, I realized, would have to be very long and skinny. Suddenly, I remembered this boudoir doll. I measured and she's a perfect fit for the dress. I realized it must be Fate! Incidentally, you can always place a custom order with me though this blog or through my eBay store: http://stores.ebay.com/atelier-mandaline. Just use the contact forms! 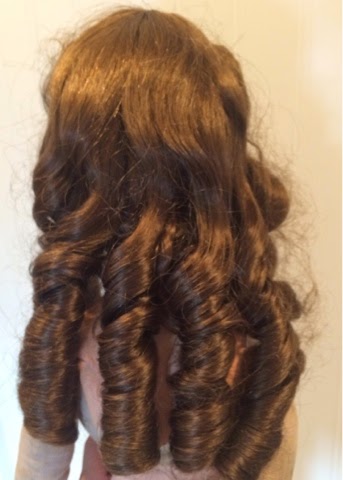 My customer didn't really love the mohair wig, however. There's nothing wrong with that; just because a wig might be typical, if you're buying a doll for yourself it should look the way you want it to look. It's not as if this doll were mint and would have her value damaged by alteration! I tried several wigs on her and my customer and I arrived at this brown one. Perfect for her new outfit!


My doll still had her stockings sewn on and one is embellished with a beautiful ribbon rose. She has her shoes as well, but they are in terrible shape, so I found new old stock vintage replacements and am sending the originals along.

Her original pink silky bloomers, or pantaloons, are in great shape for their age, with only a few moth holes, now repaired, here and there. I sewed them back on her body as they would have originally been attached.


So, she's all ready to travel to her new home! This same customer wants another doll to fit a different outfit, so I've been searching. I spent the day visiting thrift shops and looking online; not such a terrible way to "work"! I haven't found anything yet, but I will show you the restoration when I do.

Other than that, I've been mostly gardening and trying to decide what to do about the kitchen. We went to Ikea the other day, only to discover we can't afford anything. Then we looked into getting the cabinets we have painted, except for the one that holds the sink, as it's falling apart. Alas, painting and one new cabinet are nearly as much as replacing all the cabinets! So now we are looking into painting them ourselves, not a great option just as the cooking-heavy holidays begin, but then neither is going through the season without a dishwasher!

In the garden I brought all the plants in and closed my cabbages and peas up snug against the threat of a first frost two nights ago. Today it's back up in the 80s, though, so I had to go out and open the frames to give them all air! Over the weekend we were watching a marathon of a television series about people who live in Alaska and it occurred to me, while they're always waiting for it to warm up so they can do stuff, we're always waiting for it to cool off. I've done more yard work over the past week than I have for months!

Posted by Mandaline at 2:59 PM