Sometimes my blog brings me a new "friend", a person of similar hobbies and interests with whom I talk online. This is one of the great wonders of the Internet. My grandmother spent many happy years playing Bridge daily with her "club", a group of Scottish ladies. They never met in person but were a wonderful, enriching part of each others' lives.

My newest online friend is Julie. Julie, an artist, loves Lenci dolls and Edith the Lonely Doll in particular, just like myself. Julie acquired a felt Lenci-type doll and wonders if I can help identify her. I warn people all the time, I'm not an expert. I do look at dolls every day, however, in my studio, on eBay, at thrift stores and estate sales, in books, so I've picked up some knowledge. I am more familiar with Lenci dolls than most because I studied them closely to learn to make the same molded felt figures. I am using the Dorothy Coleman Lenci Dolls book as my main reference.


Julie's doll, whose name is Sabina or "Beana" for short, is made just like the pre-1930 Lenci dolls, with crossed zig-zag stitching on the back of the head and a buckram-stuffed, pieced body. Later Lenci dolls of the period had a molded hollow body. Beana has stitched fingers and toes, and her feet have a cardboard insert sewn in the sole to help her stand. She has separate stitched ears applied to her head. These are all Lenci hallmarks. Beana isn't marked, however.

Beana also has had some paintwork done, both recently and in the past. She has been re-wigged as well. I'm showing photos of her before and after the most recent restoration. I didn't realize she'd had re-painting at first and thought it was odd that her construction looked just like Lenci's, but her face looked more like a Messina-VAT or Alma doll, or even a Gre-Poir. Re-painting makes it a little harder to identify the face mold but it is very often necessary with the old fabric dolls.

Another issue with identifying unmarked Lenci dolls comes from the history of the Lenci company. Madame Lenci started making dolls as a hobby before World War I. She started her doll company around 1920. Her dolls were wildly popular and very expensive, so they spawned a rash of copies. As early as 1923 the Lenci company was running ads warning against patent-infringement and urging customers to make sure they were purchasing an authentic Lenci. World War II saw the Lenci factory bombed and nearly destroyed. A lack of materials resulted in substitutions that made Lenci dolls barely recognizable. One Lenci, for instance, was purchased in 1938 and had a bisque head marked with the Star of David. Historians speculate the political climate at the time resulted in the bisque heads, made by another company, being available for purchase by Madame Lenci at an extremely low price. In 1941 the Garella brothers, friends of Mussolini, took control of the Lenci factory and some believe forcibly kept Madame Lenci on hand for advice on running it.

A consequence of these changes resulted in many former Lenci employees scattering across the globe, where they started their own doll companies. Perotti, of Brazil, is one such, as is Messina-VAT (sometimes also called VAT-Messina). Many of these former Lenci employees' dolls are so similar to the authentic Lencis as to be almost indistinguishable. 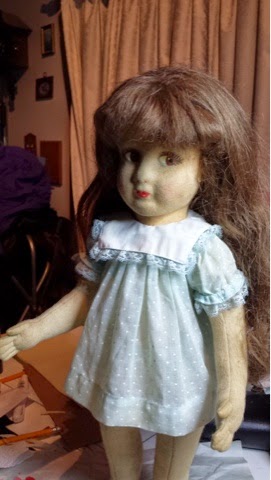 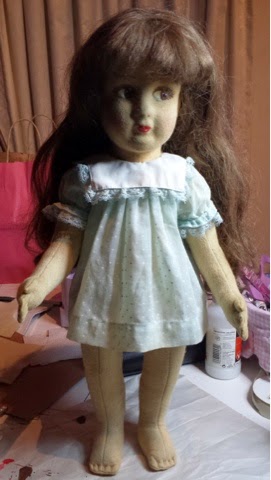 In the case of this doll, Beana, there are many similarities but also some notable differences. Beana's eye paint seems flatter than Lenci eye paint to me, but that could be the result of re-painting in the past. With her new, heavy eyelashes she looks very much like a Gre-Poir doll, but those are made of a silky cotton rather than felt. Messina dolls also typically have more depth to their eye paint than Beana has. Beana's mouth has the typical Messina rosebud shape, but Julie tells me it has obviously been re-painted. Alma dolls have a similar face shape and eye paint, but their body construction is different, and each of their fingers is usually stitched separately.

Based on the body construction, I believe Beana is a Lenci doll, made prior to 1930. Any discrepancies in her face paint can be attributed to restorations. The face mold looks like either the 111 or 149 series to me. I welcome suggestions from any of you who have different ideas. Please comment or contact me with your ideas about Beana's true identity.