Around the World and Back in Time


This weekend was so taxing, Jerry had to literally drag me out of bed this morning. I just could not wake up! I don't know why everything always has to happen at once. We had more going on than we could attend Saturday. Toward the end of last week I got a big box of international dolls, mostly from the late 50s to early 60s, to fix and sell. None of these particular dolls are by Lenci, but many are Lenci-inspired. Without digging my reference books out I can't state this unequivocally, but I don't remember anyone else producing "tourist" dolls on a grand scale before Madame Lenci. She took great joy in reproducing the various regional costumes of Italy and the rest of the world for her dolls, and they became staple souvenirs for travelers. Everyone started copying her regional dolls. Even Gorham was producing Lenci copycats in Italy!


I love the amazing intricacy of the costumes adorning these minuscule dolls. My newest lot has a late 50s or early 60s Roman woman wearing the signature Magis Roma dress. Then, there's a pair of tiny Polish dancers stunningly decked out in necklaces, belts, and flowers despite being only about five inches tall! They really look like they're dancing, they're made with so much movement.

Madame Alexander got into the act with her "Friends From Foreign Lands" Alexander-kins, and there is a pretty Italian Wendy-kins in the lot. She's an early 60s doll, my favorite Alexander-kins face mold, with her big brown eyes and star-shaped lashes and delicate coloring. These needed cleaning, and the Polish woman needed a few dots of paint. I finished those and then went shopping for more inventory.


Our neighborhood, which is huge at over 400 houses, had its annual yard sale Friday and Saturday and most of the other large churches and neighborhoods held theirs to coincide. I shopped Friday evening and early Saturday morning and picked up some good vintage stuff for my store, but my teen had his first mud run, the Warrior Dash Saturday afternoon and both he and my daughter had sleepovers Saturday night, so I didn't get to hit all the sales. I spent Saturday evening and Sunday afternoon cleaning and photographing my new inventory. Then I worked in the garden for about an hour. After that we took the boat out and went swimming. When we got home I gave my teen a haircut. Then I stayed up until after midnight listing new stuff in my store. Friday alone I walked about 21000 steps, around 10 miles. That's pretty high for incidental walking, not doing a marathon or anything. So, I've had it! And I still have a mountain of muddy, wet laundry to wash.

Even without making it to 90% of the sales I did pick up some great finds. I got a 1973 Sunshine Family with their truck. I had the Sunshine Family and I adored them! Little baby Sweets looks so familiar! The Sunshine Family, Steve, Steffie, and Sweets, lived in their truck. It had a "piggyback shack" craft store you could attach to the back so they could travel around and sell crafts for a living. They did a lot of gardening and rode around on a tandem bicycle with a rickshaw cover. What's not to love, especially in 1970s California? They were just like practically everyone we knew! Back then my best friend was another little girl called "Ladybug." 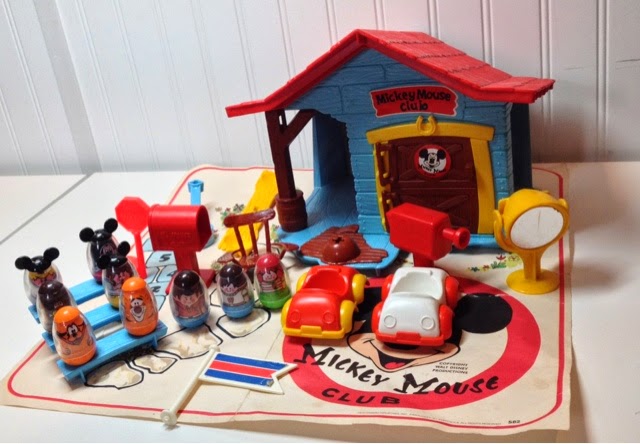 Then I got the 1976 Mickey Mouse Club Weeble Woobles ("They wobble but they don't fall down!", Jerry exclaims every time I mention them). I had those too, along with the cowboys and Indians and their fort. My fingers respond when I close the club house door as if they were only yesterday replicating the action. It's amazing how time disappears when you find an object loved in youth or childhood.

I also found a giant sewing basket full of notions I can use in my work. Poor Jerry lugged it all around the neighborhood until it scraped his hands. I did offer to carry it, I want you to know! This contained several cross stitch and knitting patterns I doubt I'll ever get around to using, so I have those for sale in the store.


Friday I also found a garter snake in the road and brought him back for the garden. Snakes are great pest control. I don't mind holding snakes. When I was a little girl I was always bringing animals home. Over my childhood I kept snakes, mice, turtles (one I hatched from an egg), frogs, rabbits, and all kinds of insects. I was legendary among my grandmothers for being a difficult girl. I showed up at my Norwegian grandparents' carrying an enormous flipping carp I pulled out of the lake with my bare hands when I was four and brought a live, enraged sparrow I captured, also with my hands, to my other grandparents' a few years later. My parents didn't care if I kept my animals in the basement but my grandmothers drew the line at wild animals in the house!

The garden is doing well, as you can see from my photos of the snake cleverly concealing himself in the rhubarb. All my tomato leaves from my earlier post rooted. You can read about that here: http://mandalineartfulliving.blogspot.com/2014/04/go-sideways-for-tomatoes.html. We have so many between those and the volunteer tomato plants from the compost, I'm going to have to till another few feet of garden somewhere for them!


This week I have another life sized cloth doll to make for a customer, and I hope to get at least one composition doll finished. This weekend I had to chase down a person I found linking her doll listings on an international eBay site to my blog, making it look as if her dolls were made by me. I love when people learn from my blog and even use it as a reference, with attribution of course, but it's never OK to try to pretend another person's work is linked to yours or to copy someone's blog without permission. I have to admit, I was a little flattered, though. Jerry said, "You're famous enough to get plagiarized!" Just like Madame Lenci, right?

To purchase any of my fab yard sale finds or order your own custom creations, please visit my store: http://stores.ebay.com/atelier-mandaline. I hope you have a productive week!
Posted by Mandaline at 12:52 PM