Yesterday was just about the worst day ever. Having finally gotten over the worst of my "cold", which I suspect was a chest and sinus infection at the worst of it, I woke up before dawn hoping to get a lot accomplished. I was greeted by the dismal news that in the height of my illness I apparently mixed up two eBay orders. The packages were the same weight and both heading to the same state and I taped the shipping labels to the wrong boxes. So I am involved in long-distance negotiations with the two buyers, except one isn't answering. While I was dealing with that my oldest came to my office to show me his eye was swollen shut. He refused to stay home from school because he had to take a test, so he came home afterward. When he got home his eye was all red: clearly pink eye. So we had hours at the doctor and pharmacy and I have the guilt of knowing he spread germs all over school all morning. I spent the rest of the afternoon washing stuff, trying to keep the notoriously contagious infection from spreading to my other two kids. Pretty much the only thing that went well all day was my Dollikin restoration.

Dollikin arrived as you see her above, in need of re-stringing, new hair, new eyes, and deep cleaning. The cleaning revealed a non-factory paint job was done at some point and that washed away, plus she had some uneven skin tone, so I gave her face a repaint. I tried several different combinations for her coloring but settled on keeping it the same as when she was new: green eyes and blond hair. I re-wigged her rather than doing a re-root. I don't really have the patience for re-rooting and I'm not great at it, so I think it's better to just do a new wig when I can. I decided to name Dollikin "Diana" because she reminds me of Princess Diana!


As always with vintage dolls, this one still has some indicators of her age. There are a couple nicks in her eye sockets. That seems to be obligatory! It seems whenever a doll's eyes stop working the child's first measure is to poke at its eyes with a stick or something. I smoothed these over with acrylic modeling gel and while they are still slightly visible you really have to look to see it. I'm sure it bothers me more than anyone else! Her legs have uneven skin tone, as do other parts of her body, but it was minor enough to leave it alone. It doesn't show when she is dressed. This doll had the faint dark eyeliner that the widow's peak Dollikins have, which is unusual for a blond doll. I don't know if it was factory or not, but it didn't wash away even with a Mr. Clean eraser. I decided to roll with it and just repainted the eyeliner and eyeshadow like she would have had. I painted her lips, blushed her cheeks, and evened out her complexion. Her eyebrows are original. I sealed the paint job so it should last a good long time.

The central spring in the torso had seized up so I removed it and replaced it with elastic. My husband had to help me get her stringing as tight as possible without causing splits in her plastic. She can stand and sit alone and do yoga poses now! I am selling re-stringing kits for Dollikins and other ball-jointed dolls, so please check my shops on eBay and Etsy if you have one to restring. 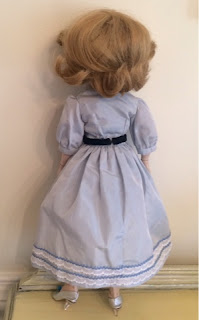 Diana came with an exceptionally pretty outfit, a complete ensemble. She has a bra and panties that match her taffeta lace-trimmed dress and a sheer slip. Her dress is belted with a black velvet belt. This dress is exquisitely made; it is very professional with dressmaker details like darts in the front and back and a fully-lined bodice. It is not tagged and seems newer than the doll, although it uses all the classic techniques of the really nice doll clothes from the 1950s. I added stockings, shoes, and a purse that are vintage Madame Alexander. The shoes had bows missing from the toes and  spot where they originally were glued, so I covered that by gluing on turquoise beads. Diana is perfectly turned out from head to toe, a real modern princess!


As with all my dolls, Diana comes with a new hair net and my own signed tag, so she's ready for gifting or display in your collection. A careful girl would probably love to have her as well, but please keep in mind vintage playthings might not meet today's standards. You can find Diana and many more lovely dolls in my eBay and Etsy shops, and through Sunday, 3/20, at midnight they are on sale! Use coupon code LUCKY for 15% off any order from my Etsy shop and take an additional 10% off in my eBay store, including already-discounted items!

This Saint Patrick's Day holiday has already been lucky for me. I woke up to an international order for one of my custom t-shirts. That's the third shirt I've sold. I have wanted to design my own kids' fashions for years, but I was always held up by the small number of people who want to pay a realistic price for a hand-sewn garment. The new diecut machines and heat transfer material offer a cheaper alternative: my designs on less expensive t-shirts and bodysuits. My husband gave me a pricey Silhouette Cameo machine for Christmas and I purchased  lot of shirts and vinyl and finally an extremely expensive heat press, and... nothing. I was getting worried it was all a huge waste of time and money, so I'm thrilled to have things finally starting to sell! Then this afternoon my wonderful friend emailed to say she is sending me a much needed and extremely generous gift: a really valuable part I need for one of my dolls, as well as a dress for her! I hope you have a very happy and lucky Saint Patrick's Day too!

Posted by Mandaline at 1:31 PM