I wrote in my last post about my pleasure in having the opportunity to purchase a real, tagged Lenci doll from around 1940. Besides the fact I've always wanted one, or have wanted one at least since I was about 10 (this entire blog began years ago with a post about my love for Edith, a Lenci doll) I was happy to get one so I could definitively compare a doll I'm pretty certain is also a Lenci, but who has lost her clothing and tag.


The large Lenci doll is tagged twice, so she makes a good comparison doll for the small, unmarked one. I saw the little unmarked doll in a lot of doll clothing and bought the whole thing because I was just sure it was a Lenci doll. When I saw her in person I was even more sure, and now that I've compared her to a tagged doll I'm certain.

Even Dorothy Coleman, the author of my Lenci book admits it's very hard to pin Lenci dolls down to one specific type. Madame Lenci designed a vast variety of dolls, and her company was beset from its inception by Italy's series of wars. The various wars caused supply shortages, forcing changes in the dolls' composition. Sometimes war produced opportunities for different types of dolls; one Lenci doll was found with a bisque head and flirting glass eyes. The head was marked with a Star of David, leading to the conclusion it was probably made by a Jewish company forced out of business by the Nazis. Lenci was probably able to pick up the heads at a large discount. More changes were forced by the popularity of Lenci dolls. Many companies, some founded by former Lenci employees, made cheaper copies of Lenci dolls, forcing the Lenci company to scale back their own quality and lower their prices in order to compete. Some of these dolls are nearly identical to Lenci's own dolls, which leads to confusion today, when so many years have passed.

One of the myths about Lenci dolls is that if the doll has zigzag stitching on the back of the neck it's a Lenci doll. Lenci dolls are sewn this way (see the photos), but they were not the only company to finish dolls with this stitching, so it's not definitive proof of a Lenci doll.


Another thing people say about Lenci dolls is the pointer finger and thumb are sewn separately, with only the center fingers joined. This is sometimes true, but not always. I've never seen a Lenci doll with mitten hands or stub hands, but I have seen different varieties of finger stitching. What I haven't seen beyond Lenci dolls and what to me is anecdotally almost a sure sign of a Lenci doll is the blushing on the hands. Lenci dolls are blushed extensively and beautifully from head to toe with pastels and the hands are no exception. Note the blushing on the inside of the pointer finger and less noticeably on the stitching line of the larger doll's hand and compare it to the faint traces of blush left on the inside of the thumb and along the stitching lines of the smaller doll's hand. Her other hand still has bright blush. The smaller doll had more play and more of the pastel blush wore away, but it's still there if you look closely. I haven't ever read this in any books, but I've sold probably about a hundred vintage and modern Lenci and other brands of pressed felt dolls over the years and none of them are ever blushed like the Lenci dolls. If you find one with the pastel blush intact and a Lenci face mold it's almost certainly a Lenci doll.


Lenci is famous for their child dolls whose bodies as well as faces were pressed felt. The hollow torso dolls are pretty unique among felt dolls of the time period. Nowadays Maggie Iacono produces dolls entirely of moulded felt, as does R. John Wright, I believe, but back then Lenci was pretty much the only company working that way. After a while, however, Lenci started to use regular cloth for their doll bodies instead of felt, especially on the regional dolls and mascotte dolls whose clothes were not removable. During Mussolini's time the Lenci company and factory was basically stolen from Elena Scavini and given to friends of Mussolini. Elena Scavini was kept on, some say against her will, to run the company but many changes were made during this time. The original Lenci factory was destroyed in World War II bombings and a new one was built. Elena Scavini herself died shortly thereafter, in 1950 or '51, reportedly in a car accident, and the original Lenci dolls were lost to history until the revival of the 1970s and '80s when reproduction dolls were produced with the original Lenci moulds and techniques of the Lenci heyday. You can see from the photos above that both of these dolls use the cloth bodies with felt limbs. Note the string tab joints used on the small doll; this jointing technique is sometimes seen on larger felt dolls using felt tabs rather than disk joints.

Another thing to note in the photos above is the impressive detail given to the underclothes on even the smallest and cheapest Lenci dolls. The tiny lace trim on the petticoat and pantaloons are a Lenci hallmark, as is the scalloped felt edging on the small pantaloons. The early Lenci child dolls wore bodysuit style chemises with inset bands of tiny lace very much like the lace on the larger doll. If you find a Lenci type doll with such a chemise it's a good clue of a genuine Lenci, as are the felt edged pantaloons on smaller dolls. The following photos show examples of Lenci underclothes from the Coleman book. See the string tab joints of the arms in the first photo.


Lenci dolls, especially the child dolls of the 1920s, often have feet with toes defined by stitching and are sometimes marked on the soles of their feet or shoes. As you can see, however, a doll without this type of feet is not disqualified from being a genuine Lenci. The feet of both dolls shown are pieced together and have cardboard sewn inside the soles to aid in standing. Neither has a Lenci mark on the soles, although the small doll is marked with the number 5 on one foot. Note the small doll's legs are cloth and not felt, characteristic of later 1940-ish mascottes.


By far the most famous and copied Lenci face is the googly-eyed "surprise" face. Almost every Italian doll company of the time produced similar surprised dolls for the tourist trade especially. The side glancing eyes are a famous Lenci trait, but many companies copied that so it's not a sure indicator. What is unique to the Lenci faces, especially all but the earliest ones, is the deeply incised sculpt. The Lenci googly eyes are pressed so thoroughly into the felt and painted with such shiny paint they look as if they could be glass. Some were in fact made of glass, but even the felt ones look at first glance as if they could be. Another fairly unique Lenci hallmark is the use of modeled and painted eyebrows. The eyebrows were sculpted into the mould so they stand out in relief on the felt faces and then are painted over with color. My little doll is a fantastic example of these Lenci qualities.

Other pretty unique features of my doll that mark it as a Lenci is the use of both felt and organdy in the costume. Lenci was famous for their felt flowers as well. Some other companies, notably Magis Roma, used the felt flowers but they tend to be flat whereas Lenci's are mostly sculpted as is the rose on the neck scarf. Hardly any other companies made dresses from both felt and organdy but most of the Lenci dolls' are made this way.

Another Lenci feature that's fairly exclusive are the use of applied felt ears. Even the tiniest Lenci dolls have ears. This was copied by other companies, but few made their ears with as much care as Lenci. The larger doll ears are two layers with tucks for shaping and top stitching and blushing. The small dolls' ears are single layer. 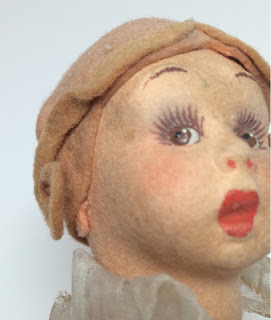 My small doll is notable even among Lenci dolls for her felt hair. I've seen a couple Lenci dolls with long felt braids but I've only read in the Coleman book about a doll with felt curls like this one's. There is no photo of that doll, but it is mentioned. I've never seen a Lenci-type girl doll with a felt wig other than actual Lenci dolls. Eros of Florence made a lot of male dolls with felt wigs but not female. 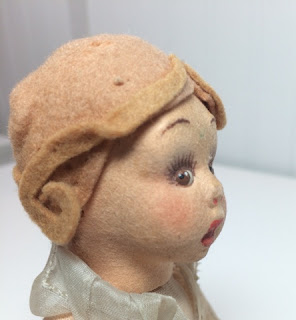 I'm quite confident, indeed, I'm certain, this is a Lenci mascotte, probably from around 1940 or so, the same age as my larger Lenci. I plan to make a dress for her so she doesn't have to hang around in her underwear any longer and am perusing all the photos of various Lenci costumes I can find to help my design's authenticity. The large doll and many others are available in my Atelier Mandaline eBay and Etsy stores and this one will be for sale soon, so please check.

Posted by Mandaline at 6:08 PM

Email ThisBlogThis!Share to TwitterShare to FacebookShare to Pinterest
Labels: How to identify a Lenci doll, LENCI, Lenci characteristics, Lenci history