About two weeks ago we were preparing for a trip to Ohio when our youngest suddenly burst into tears during lunch and told us he wasn't feeling well. He was nauseous, with a fever and sore throat. I rubbed him down with the combo shown above, then gave him some DiGize for his belly and some of my homemade cough syrup for his throat, and sent him to bed. Within four hours he was fever free and feeling well and we were able to go on our trip. However, the second day of our trip he again felt sick. I had my oils with me and gave him the same treatment and he recovered and has had no further relapses.

The oil blend I used is modeled after Young Living's M-Grain. I don't have that one, but I have many of the oils in it so I used those. I added ImmuPower to help the immune system heal itself. You can get most of these oils and the diffuser for a great price in the Young Living Starter Kit. Once you're a member (through buying a kit) you get wholesale pricing on the Young Living products! Make sure to like my Naturally Amanda Facebook page for more great tips and recipes. 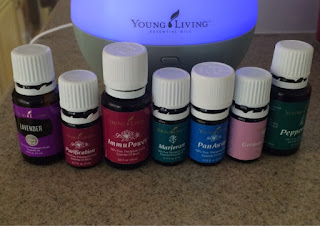 Mix all the ingredients and rub on the forehead, back of neck, jawline, and the bottoms of the feet as needed until the fever breaks. Wintergreen oil may be added for extra pain relief. The essential oils can be diffused for further effectiveness. For women's hormonal or monthly headaches substitute Dragon Time for the ImmuPower. If upset stomach is present add the Stomach Upset Blend to the treatment. 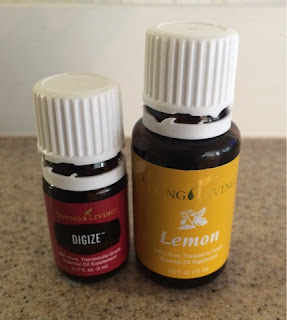 Mix the oils and rub all over the abdomen. Drink some more of the oils in water or take in a capsule as well for upset stomach. Peppermint oil may be added or substituted for the DiGize.

A couple days after we got back home I was out for my walk and started feeling as if I were getting a migraine. I hurried home and by the time I arrived I couldn't see out of one eye, a classic precursor to a migraine. I was really upset, because I stopped getting the monthly migraines I used to have when I started using Young Living's Progessence Plus. Soon I was having chills and coughing, and then I realized it wasn't a migraine but most likely whatever my little one had earlier in the week. I mixed up the same blend I gave him, but with the addition of Dragon Time in case I was experiencing a headache caused by hormonal upset. I never actually even got the headache and I too was well in less than 24 hours.

It's not surprising people are picking up germs; since the end of June we've been to Hilton Head Island, South Carolina; Savannah, Georgia; Nashville, Tennessee; Kansas City, Kansas; St. Louis, Missouri; Garner, North Carolina; and Covington, Kentucky/Cincinnati, Ohio. Every bit of this was road trip travel, so we've been all over the place and it's been all over us, literally. I probably should have rubbed everyone down with ImmuPower to prevent illness, but I didn't think about it. I've noticed an uptick in my allergy symptoms and headaches, most likely due to keeping irregular hours, not taking my oils and supplements as often as I should, and eating unusual foods. It will be good for all of us to get back to our normal routine.

This past Saturday we drove to Hickory, North Carolina, about an hour away, to do some back to school shopping and let my son meet his girlfriend, who recently moved. On the way I noticed my husband seemed unlike himself and looked peaked. By the time we got back home that night he looked awful and was complaining he had such a headache his eyes hurt when he moved them. He then developed the fever and chills and cough as well, so clearly the same bug that afflicted the rest of us a week earlier. It turned out, when I questioned him, he had a headache the whole week but didn't mention it. He tried ibuprofen, cold medicine, and sinus medicine with no result, but did he think to try any oils? Of course not! When he was finally too weak to resist I rubbed him down with oils and turned on the diffuser. Since he waited so long and got so much sicker than we were I also made him drink a cup of Wolfberry Tea: Line the bottom of a mug with Young Living organic dried wolfberries. Bring water to a boil and pour about 8 ounces over the berries. Steep for 5-8 minutes and drink the liquid as tea. When you are finished drinking the tea, eat the re-hydrated wolfberries.

My husband rarely gets sick, at least that he will admit, but when he does it's as if he's at death's door. He just doesn't do illness halfway. Saturday night he was just burning up with fever and shivering about half the night. He kept applying the oils and I ran the diffuser in the room. Around 2 AM the fever broke and he started sweating. I guess he was sweating the sickness out, I don't know. He tends to do this when he's sick. He put a towel on the bed but still by morning the sheets, duvet, pillows, towel, and several sets of his pajamas were wringing wet. He was fever free, though, and has remained so. Did the oils help his body fight off the illness? I have to believe they did, since he spent the week taking various pills that didn't help, but I can't prove it. The oils make me feel empowered in these situations though, so it's comforting.

Although my husband was well on Sunday I was left with a big pile of sweaty, germ covered laundry. I machine-washed everything I could, but my husband's special orthotic pillow and our Chinese silk quilt aren't washable. Just a tip: if you ever find yourself in China, especially near Beijing, buy a silk quilt. These are duvet-type bedcovers made by pulling silkworm cocoons apart and layering the resulting fibers until they resemble polyester fiberfill or quilt batting. Once the silk batting is thick enough it's covered with fabric.

The factory workers tried to teach me and the other women in our group how to pull the cocoons apart but we messed it all up and they had to re-do it. The blankets made this way are amazing. They are feather-light but really thick and soft. In the summer they stay cool and in the winter they are very warm. You can buy silk covers for them to make them even more luxurious. The only drawbacks to these are they can't be washed and all the sizes, like everything else in China, are too small for the corresponding Western beds. To clean them you are just supposed to hang them in the sunlight to air them out. Since ours was so germy I made a disinfecting spray.

Mix all ingredients in a spray bottle and shake to blend. Spray lightly on linens and hang them in the bright sun if possible to dry. Young Living Thieves can be substituted for the PuriClean if desired.

I used PuriClean from the Animal Scents collection, as this disinfecting blend is formulated to clean wounds to prevent infection. If you don't have that oil you can substitute Thieves, which also kills germs. Lemon in the blend helps get rid of stains, especially when combined with sunlight.

I can't even tell you how good my bedroom smells right now. I sprayed the disinfecting linen spray on our mattress and bedspread and throw pillows in the room and ran the same oils in the diffuser. I changed the sheets and used a set that have been folded in my linen chest with lemon scented soap. Combined with the sunshine and fresh air scent of the silk quilt and pillow, the bed is so soft and clean. It's been a pleasure to walk into that room for days. Right now I air the linens and curtains and the linens and curtains and things about every 6 months, but I might start trying to do it weekly just to enjoy the smell!

Posted by Mandaline at 2:39 PM