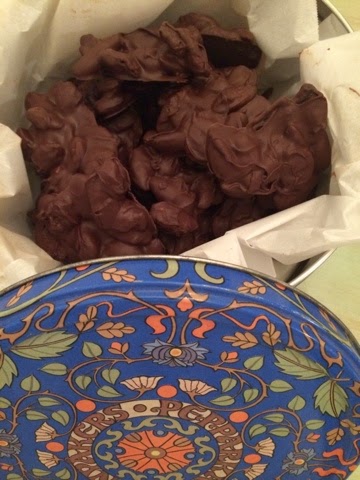 This Christmas Eve finds us at sixes and sevens, our careful plans upset. We were going to attend the Christmas Eve service at the Methodist church in Lincolnton tonight. That takes me right back to childhood. My grandfather was the choir director of the Methodist church in our hometown for 40 years and would start planning his elaborate Christmas Eve midnight service in August. We would watch the Mormon Tabernacle Choir broadcast every year for inspiration. His programs were spectacular; I never even realized it was 1 AM by the end, I was so rapt!

The Methodist church was right down town, and our town was glorious as a Currier and Ives print at Christmas, with lights everywhere and carols piped from speakers on the corners of the buildings. We would walk through the still downtown, music echoing through empty midnight streets, into the jeweled pools of light through the stained glass windows, and through the front doors. I always felt privileged to go to the Methodist service. The Lutheran service my other grandparents attended was earlier, and so until I was deemed old enough to attend the midnight service I was relegated to the Lutheran service out on the edge of town, also nice, but not as magical. Lincolnton is the same sort of town, with carols playing downtown, and lights and horseback rides and a big, fancy Methodist church, so going to the Christmas Eve service is like stepping back in time.

This afternoon, however, while picking up last minute necessities for tomorrow (more on that later), it was raining and such thick fog rolled in we couldn't even see Little Mountain, though we were standing at its base. We decided to forgo the half hour drive through rain, fog, and darkness and watched the original Miracle on 34th St. instead.

The reason we had to pick up Christmas necessities is that, instead of traveling to Asheville with my parents to spend the day and night at my sister's, we are now hosting last minute because my niece suddenly developed an extremely high fever, over 105 at one point today. She has tested negative for pneumonia and strep throat and flu. At this point the doctor thinks it might be croup, since she also has a terrible cough. We're mightily worried about her, and of course wouldn't impose on my sister (who also has her in-laws visiting from Canada) even if we were willing to expose ourselves to the illness. I had nothing suitable for Christmas dinner thawed out so we hastened to the store, which thankfully had leg of lamb on sale for half-off. I hope I can produce an acceptable replacement for the 20 pound turkey my sister planned!

Although the holiday has started off more hectic than I'd hoped, I am thankful we are safe at home, with no one ill (knock on wood). The children are disappointed to miss their cousins, but have their grandparents here. My youngest did just announce two days ago that he wants a spaceship "with GPS" from Santa. That's the first I heard of that, so he's destined to be disappointed in that.

Of all my gifts, one of the greatest are my kindred spirits and those I love. I want to thank you for sharing my blog and ideas and I thought I'd share a favorite Christmas recipe with you all. This is a far healthier treat for the holiday, packed with antioxidants. I adapted a Shape magazine recipe into this one. It features dried cherries, a family staple. My grandmother grew up on a cherry farm on Lake Michigan and we pick up boxes and boxes of dried cherries to bring home whenever we visit.

Since I use raw almonds I salt them before cooking. You could toast and salt them ahead of time but I rarely make this far enough in advance to have the time. I recently read an article about all the health benefits of Himalayan pink salt, so I used that. I spread the almonds in a layer over the bottom of the Crock Pot. I grind a layer of salt over all.

Spread the 12 ounces of dark chocolate over the almonds.

Layer cherries over the dark chocolate.

Spread the semi-sweet chocolate over the cherries. Then add the remaining spices to your taste. I probably use about a half teaspoon of each.

Cook in the Crock Pot on low about 2 hours, stirring occasionally.

When the chocolate is melted drop by spoonfuls onto a pan covered with parchment paper and set out to harden. When the chocolates are cooled and firm remove to a covered tin or plastic container.

I sometimes switch out the ratio of chocolate so I use mostly dark chocolate for these; it just depends on what I have one hand. I always have almonds and cherries because I freeze them as part of our food storage. I hope this recipe becomes one of your favorites. May you have a blessed and fulfilling holiday and wonderful new year.
Posted by Mandaline at 7:52 PM