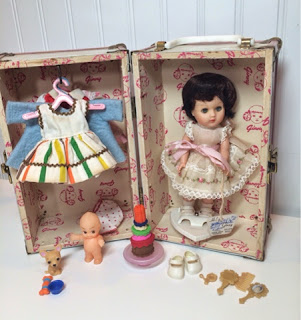 Yesterday I finally finished another Ginny trunk set. This is the third of the four filthy dolls I got as a lot. This one mostly escaped damage somehow. This is one of the last Ginnys produced in the United States. She was made only from 1963-1965, so now she's very hard to find. She's a vinyl head, bent knee walker with rooted hair. Her hair is perfect! Her head doesn't turn as she walks; only her legs walk. Now that I've cleaned her and re-strung her arms she looks wonderful. The only remaining issue is some brown spotting to her arms that I couldn't remove. It's pretty light and not too noticeable.


The previous owner wrote on Ginny's original wrist tag, which is too bad because it's in perfect shape otherwise. She had notes on all the dolls, however, and obviously wanted to make sure she carefully archived her collection. She noted on the tag that this Ginny was the last one made with bending knees.

Besides her original tag, Ginny wears panties that look original and what I think is the #18341 party dress outfit of 1962. The panties have a small brown mark on back. The dress sash would have been a much darker pink when new, I believe, as the stitching is darker than the ribbon. Ginny has white shoes marked "Ginny", socks that seem correct, and a slip that matches her dress. So, a well-preserved early 1960s doll! 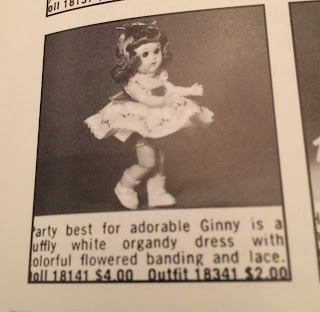 Since I had a party dress for Ginny, of course I she has to have a party! Looking through my stash I found a birthday cake. This is a puzzle eraser set that was meant to stack up on a pencil I stacked it on a crayon so it has a flat base and can be placed on a cake stand. I looked through the rest of my stuff and the story just played itself out. 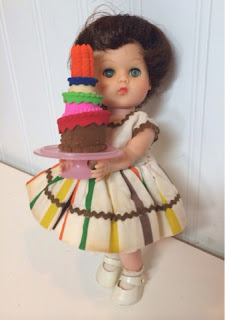 Ginny helps mother bake the cake for her birthday party. It's a three-tiered cake with tons of candles! Each layer is a different flavor so all Ginny's guests have their favorite. Ginny wears her work dress to help in the kitchen. It's her work dress because it has some faint red dye transfer here and there and some age darkening, especially along the hem. 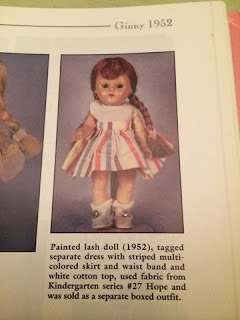 Although Ginny's work dress isn't tagged it really looks like a Vogue piece. It has a hook and eye closure and attached eyelet slip. The fabric appears to be the same as in the photo above, used in the Kindergarten series #27, Hope. I'm pretty confident it's a Vogue dress, but there isn't a tag and I can't find an exact photo match.

Mother suddenly realizes she's forgotten the grape juice she needs to make the punch. She gives Ginny some money and asks her to run down to the corner store for some. Ginny puts on her Mommy-made felt coat. The color really brings out the blue of Ginny's eyes. There is a small brown mark inside the coat but the outside is fine. The coat is very well made.


When Ginny returns the guests have arrived. "You'd better go ahead and open your present," says Mother. "We can't keep it quiet anymore!"

Ginny opens the biggest box and out tumbles a real live puppy! He has his own food bowl and rubber bone. "I'm going to call him Sparky!" Ginny exclaims. Sparky and his accessories are modern fashion doll pieces.


Glamorous Aunt Carol is visiting just for the party and she brings Ginny a beautiful gold dresser set, with a fancy comb, brush, hand mirror, and a bottle of real French perfume. "It's fit for a princess!" Mother says. Ginny sprays on some of the perfume and feels really grown up. The dresser set is another modern fashion doll piece.

Ginny's been leaving hints for months, so Grandma knows exactly what she wants. Ginny is thrilled to open up her new Kewpie doll. "Thank you!" she says, cuddling her doll. The Kewpie is a real miniature vintage doll. It's from about the same era as Ginny. It looks like a Cameo piece but has no markings. The Kewpie has jointed arms and neck and sweet little starfish hands. This has minor play wear, small gray marks on the back of the head and legs.

After the party as an extra treat, Ginny gets to spend the night at her friend, Betsy's, house. She changes into a factory made mini-dress and bloomers set with flocked collar and button covers. This came in a lot with a vintage Nancy Ann Storybook Lori Ann doll but it isn't tagged so I don't know the brand. It has big flat painted snaps in the back. This outfit also has age yellowing.


Ginny goes to Betsy's church for Sunday school. She wears her pink cotton dress with attached organdy pinafore. This has no tag. It is a factory piece and closes in back with a Greek key snap. The snap is loose and I sewed around it to reinforce it, but the closure should be worked with care.

Ginny comes with her homemade vintage stand. The previous owner made this by gluing Ginny shoes to a heart-shaped plastic stand.  I do wish she hadn't done that to the shoes, but it is a good idea, I guess, especially if you have a doll with loose joints or something that has trouble standing up.


This is my second Ginny trunk set and uses the same trunk as the other set, #7862 from 1957. This one is in better shape than my other trunk, with less paint wear and much less wear to the interior Ginny logo paper. There are still some scratches and dents in the metal, especially around the buckle. This is still a really nice, sturdy wooden trunk sheathed in metal. They certainly don't make things like this anymore!

I'm such a sucker for trunks and trunk sets, I usually have a bunch of them. It isn't really sensible financially; you'd get more selling this stuff piece by piece. I've seen people selling just the Kewpie doll in this set for $10 and over. I can't help myself, though. I just love making the trunk sets! This one made me feel better. I was sick last week after I caught my 5-year-old's cold and then when I was almost better my 10-year-old came home with a terrible cold and now I caught that one too. I could just go to bed and cry! But instead I made a trunk set. You can find this set and many more wonderful things in my store so please check: http://stores.ebay.com/atelier-mandaline.

Posted by Mandaline at 5:40 PM