After a long and arduous journey, my 14 inch Margot ballerina is finally restored. I ordered Margot initially because I've never seen this outfit before in person and the outfit is in great shape. I've seen photos of the larger Margaret ballerinas wearing a similar ensemble and I've seen a catalogue photo of Margot wearing a blue ballet costume, but this pink one on this doll I've only seen in photos, never for sale! I knew the doll was in bad shape, but I figured I could use the outfit for another doll, like my Polly Pigtails and sell this doll's good parts to recoup my money.

When Margot arrived she was in even worse shape than noted. Her eyes were stuck open so tightly you couldn't even budge them with your fingers. She has had a vintage lash replacement at some point and the lashes looked odd. The worst flaw, however, was her body. Her walker mechanism was so stiff you couldn't move her legs at all and she had splits in her shoulders, neck, crotch and hips. Still, Margot is such a rare doll I  couldn't stand to just give up on her. Search Madame Alexander Margot and even Margaret on eBay or the Internet and you will see what I mean! Hardly any of these early hard plastic dolls come up!


I love the Margot and Margaret faces, too. These are the face molds that originally attracted me to the 1950s hard plastic girl dolls. I saw a pair of Sweet Sue dolls for sale a couple years ago and their Da Vinci angel faces drew me in. I've never looked back and have restored tons of 1950s dolls since then! Madame Alexander allowed use of their larger Margaret face mold by American Character for Sweet Sue dolls and Arranbee as well from what I understand, for Nancy Ann. It can be very difficult to tell these dolls apart when they aren't marked. Sweet Sue almost always has the reddish dark blond Tosca wig, though. This doll is marked ALEX on the back of her neck and her outfit is tagged.

Margot is the same mold in miniature, and I think I prefer this tiny version. Though the mold is still called "Margaret" in this size, I saw a catalogue listing from the 1950s for this doll and she was named "Margot" in the listing. The sweet, pensive expression and tiny delicate features, the pointy little chin, are so lovely. My friend has a daughter named Caroline who, in my opinion, favors this doll very much, and so I think of this doll as my "Caroline" ballerina! Later, Madame Alexander used the Margot name for a Cissette mold with heavy eye makeup modeled after Jackie Kennedy, so it can be quite confusing to research the Margot dolls!

Close examination showed the walker mechanism had seized up because of a spring that had stiffened between Margot's legs. I write about this in my Anatomy of a Walker Doll post. I had Jerry hold the doll while I tried to get some wire cutters inside her to cut the spring, but as I did the poor stressed seams gave way and Margot split in half completely! I kept her like that for a while as I tried to decide whether to attempt to fix and replace the walker. In the end I decided she was too fragile and the walker would limit her movements so I strung her with elastic cord instead. Now that she's a strung doll she can really dance and pose like a ballerina!

I could see right away that besides the eyelashes, Margot had been the victim of another amateur repair. Someone tried to fix a broken piece in her arm with a Popsicle stick and masking tape! I re-created the piece with epoxy and painted it. These are the type of arms that went in the walker dolls. You placed the piece inside the doll on a peg in the body and the arms would swing down when you moved the legs for a realistic walking motion. Margot doesn't really need the arm pegs anymore since she's not a walker, but since she already had one I thought her arms might as well match.

I tackled the stuck eyes next. From what I can see, someone in the 60s or 70s took very stiff synthetic brush bristles and stuck them one by one into the eyelash channel so deeply they actually come out of the back of the eye! I can't imagine how long that must have taken! I couldn't get the eyes out to really see though. Then they had replaced the eyes in such a way that they were totally seized up as well. My repair was very scientific: I messed around bending the eye bar this way and that with jewelry pliers until the eyes became unstuck! Then I oiled the eye bar and weight so they could move more freely. I decided to leave the lashes alone. There aren't any gaps in the lashes, and though the direction of the lashes is a bit uneven you can't really see it at all when you have the doll on display. I think it would probably destroy the eyes to try to rip the lashes back out, and they do give Margot a sort of mysterious eyes-half-closed look I find appealing. The eyes are still somewhat sticky and Margot will occasionally require a gentle shake or two to get her to wake up.

After I fixed the eyes I glued the body back together and re-strung the doll with elastic cord. As I documented in my Roberta post, one side was too warped from the years of pressure and split back open. I ended up having to build that seam up with epoxy. It is more visible than a glued seam, but it's better than having the seam open! I painted the repaired seams and touched up Margot's face paint. As is common, she needed refreshed cheek paint and new lower eyelashes. Other than the seam painting, Margot's body didn't need any paint work. Her knees still have their original blush! Margot has a rose and cream complexion that is just lovely. She's become one of my favorite dolls in my "collection" right now. My collection is almost all for sale, so I guess it's more accurate to say one of the favorites in my store!
Margot's ballet costume just looks wonderful. It still has its tag. The top layer of tulle in her tutu has some darkening from age, but there are no holes in the tulle, which is amazing! Margot's satin panties have some fraying along the edge of the elastic. This is not visible unless you remove the panties and turn them upside down. I treated them with Fray Check so they won't fray any further. All the rhinestones are present on Margot's bodice, though one or two are dark from age. Still, this is one of the best-preserved vintage ballet costumes I've ever seen. The delicate satins and tulles just didn't stand up to age well. I dry-cleaned the costume using Dryel and helped fade the browning from age by setting the costume in the sun for a couple days.

Margot lost her original floral headpiece, tights, and shoes somewhere along the way. She would have originally had little tulle  sleeve garter-type things to wear on her shoulders or upper arms, but those are also lost. She may have had a floral sash around her waist at some point, but this is such a rare doll I can't find a photo of one in its original state to see if she had a floral sash. I made her a new headpiece with vintage-look flowers, satin ribbon, and vintage rhinestones. Then I sewed a pair of pink stockings for her. I got a pair of vintage new-old-stock faux leather shoes from my stash and switched their cord laces for satin ribbons to make them into ballet slippers. I didn't have any matching tulle so I left off the sleeve garters.


Margot's light brown wig is absolutely perfect! I just dabbed it lightly with a damp paper towel to clean the dust off and curled the back around my fingers. I could tell exactly how big to make her headpiece because her tightly coiffed wig still has its original hairpins to hold the headpiece in place! The saran hair is remarkably soft, shiny, and frizz-free.

Margot displays beautifully now. I am so proud to have brought this very rare doll back to life when I think many people would have just thrown her in the trash! And of course Polly Pigtails had a different vintage Madame Alexander costume to wear, so it all turned out well! 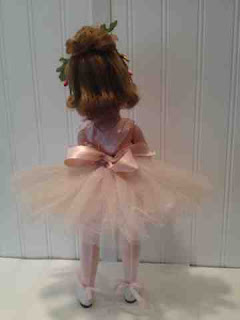 The next doll we are working on is the Sweet Violet or Active Miss (I don't know how you tell them apart) who arrived yesterday. She needs a good cleaning, some split repairs, a hair styling session, and some paint work, as well as a wardrobe. My daughter just started cleaning her today and spent most of yesterday going through my fabric stash and designing outfits for her. I'm happy this doll is such a big hit! My daughter has so many dolls I'm afraid she's a bit jaded. I would have killed for her Cissy doll, or her Revlon, or her Elise or Betsy McCalls, but she just sees them as one more doll!

I just got another Elise today, a blond one this time, so make sure to check my store for her pretty soon: http://stores.ebay.com/atelier-mandaline.