Of Successes and Storms


I know I've been long promising to show you the 1950s Day to Nighters I recovered in my Night and Day post in situ and I finally am able to do so! I think they look quite modern in their present environment. I don't think you would look at them and instantly believe they are from the 1950s. We got the wall unit/entertainment center at Ikea. I think it goes perfectly with the mid-century modern style of the couches. We originally planned to get various bookshelves and tables on Craigslist and create our own unit, but we need so much utility and to cover so much space we decided we wouldn't be able to get the clean look I wanted. You can read all about the Day to Nighters in this post: http://mandalineartfulliving.blogspot.com/2012/11/night-and-day.html.


I love Ikea because you can create custom furniture at a fraction of what it would normally cost. This was still awfully expensive, about $1200. We could have done it a lot cheaper, but I wanted the high-gloss doors because I believe they will stand up much better to use by the children. This unit will get all sorts of daily use. It holds a great deal of our library, as well as the TV, video game systems, DVDs, video games, toys, and photo albums. We still have some room left and I'm trying to decided between using it for toy storage or guest linens. Those couches push together to form a full-size bed when you remove the back cushions. The coffee table is a not-so-chic accessory which serves to denote this room's purpose as a play room. I painted the top with scenes like the pricey Thomas train table and bought wicker baskets that fit underneath to hold the toy trains. Someday I will get a nice adult table for this room!

We picked the entertainment center first. It is the part in the middle; our TV is hidden behind the sliding doors. It was shown in the store in faux walnut wood grain. I liked that, but I didn't think it would look built-in and I was envisioning a custom, built-in looking piece. We went to a different section of the store and noticed white bookshelves with white, high-gloss short doors on top. They are exactly the right height for the sloped ceiling of this room in our "salt-box" style home. We realized the doors had the same name as those on the entertainment center, so we asked if we could combine the two and were thrilled to discover we could. I originally liked white cabinets with light faux birch doors, but those doors didn't come in the large size or didn't fit the entertainment center or something, and I wanted all the same doors. We realized we could get all the same size doors and hang them at the same level to create the look of a unified wall. We have so much clutter in this room, the idea of a clean, minimalist wall of color seemed wonderful. I saw some teal doors next and like those but they didn't come in the right configuration for the entertainment center. It's too bad, because both of my original ideas would have been a great deal cheaper. Finally we settled on the high-gloss gray, and I am very pleased with how it looks. It was quite funny when we were at the store; even the employees hadn't thought of doing a whole wall like this and by the end of our design session we had two of them following us around exclaiming on what good ideas we have. So, take note, Ikea! You should hire me to come in and design stuff for you. I would certainly take part of my salary in store credit!

The thing I don't like about Ikea is that trying to purchase the pieces you want is challenging. Even though we got the store employees to print a list of all the pieces we needed we ended up with two extra drawers and it cost more than we thought it would. We were just in time as well to get the very last center unit in white and the last gray doors, because all that stuff has been discontinued. So, it seems like you'd better buy something right away if you like it. This all required a great deal of careful measurement, however, so we had to go home and measure several times. I definitely couldn't have done the measuring myself; I am glad to have Jerry for that! The entertainment center cost a lot more in the colors we chose than it said in the store, even when we account for the high-gloss doors, and we aren't sure why. You would think the white laminate would cost the same as the faux-wood finish.

I chose Olympic One "Misty Surf" in satin finish for the walls. I absolutely love it! I knew I wanted a gray, but I didn't want it to match the doors exactly and I wanted some blue in it. I arrived at this color by choosing the darker teal of the doors I'd seen at Ikea. Then I followed the swatches from that color family up to the gray section and picked a medium-light tone. It's a wonderful help to shop for paint at a store that arranges the colors this way because you can get the shade you want in a different tone. I didn't want dark teal walls in this room! This color really does mimic the ocean. In different lights throughout the day it looks gray, white, light green, light blue, teal, and more. It goes well with the gray-green furniture and the gray doors as well as the beige carpet.

Next we worked on the lighting. I picked up the mid-century style lamp at the Bullock-Kenilworth warehouse sale. This is an annual event from late January to mid-February in Rocky Mount, and we drove four hours to attend this year! I would say 60% of the furniture and accessories in our home has come from these sales over the years! People come and spend the night to shop here, and the churches all hold pancake breakfasts and such to cater to the sale! The lamp reminded me of a cool 60s surfboard, and I knew it would be perfect! It's high gloss birch with inlaid mother of pearl tiles around the base. The end table is a 1960s hand-me-down from my parents. I originally planned to paint it but I think the retro finish color looks good in the room. The original fan and light was a Caribbean plantation style, but we had a modern-looking one in another room so we just switched them.


For artwork I decided to contrast the style a bit. The frames and colors go well, but the style is more old-fashioned. You can see how blue the wall paint sometimes looks in this photo. These collages are illustrations I made in college for a CD cover and insert booklet. This was an assignment and I chose my cousin, folk-singer Sally Rogers' Generations album. These are almost all songs about the women in our family. I had recently been given my grandmother's old sewing machine. This is a turn of the century treadle, but she was still sewing on it in the 1960s. My grandfather motorized it for her! At any rate, when my grandmother stopped using it she left everything in the drawers, so it was like a time capsule. There were 1950s sewing notions and 70s Boy Scout patches and 60s patterns and church bulletins and matchbooks. I used all these everyday objects to portray a woman's life. We might spend our years on mundane details, but in the end we find we've created an entire world. 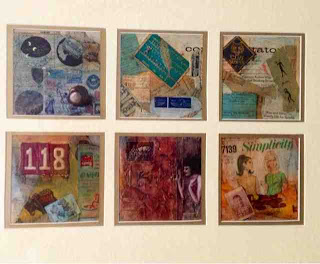 I planned to write next about my finished French Quarter type courtyard, but I had a setback today. Jerry refinished our cast iron bench for me (which was great because I've done it the last two times!) and I had my potted citrus trees placed just so. My fence boxes are complete, and I planted a tower of herbs which were just looking very full and lush. This morning I was thinking as we watered them that I'd better take a photo for the blog but I didn't and now, well, it's too late. Storms rolled though this afternoon and took the tower out! I will be able to salvage the herbs by cutting and freezing them, but it will be some time before they are filled out and photo-ready again! Luckily the planter is resin and didn't break. I do still need to make some throw pillows for the Day to Nighters, so maybe that will be the subject of my next post.


I did at least have some garden success today; I picked more peas and noticed some potatoes peeking out of the soil. I dug up our first new potatoes. I didn't actually mean to harvest the tiny ones yet but I accidentally broke the stems checking their size. We have more on the way very soon. I can't wait! So Mother Nature gives as she takes.

Posted by Mandaline at 6:08 PM