Today I give you another post concerning gardening and cooking, as that is pretty much what my life has been comprised of recently. I haven't really done any creative work beyond trying out some new things in the homemaking arena. We have entered the big push to the end of the school year. We have one child in marching band camp, Boy Scouts, and swim team, another on swim team, and a third still wrapping up speech therapy for the year. Add to that all the end of year testing, celebrations, and ceremonies, as well as play dates and visitors and holidays, and I barely have a moment to call my own. Two more weeks of school and then we will have only swimming and band camp and travel to occupy us.

Besides the children's schedules, I have my own things to do. We are having a terrible time with rodents in the garden. Moles are tunneling through the vegetables and chipmunks or rabbits or something dug up my new lily bulbs and ate them. I am very sad, because although this new yard came with many nice plants, my favorites: Stargazer lilies and gardenias, are not among them. I was hoping for some lilies in a few months. These bulbs must be very sweet, because I have a lot of trouble keeping animals out of them. When I plant them in the back the dogs dig them up and eat them and when in the front deer or squirrels or something else eats them. Last week I made a hot pepper sauce and poured it in all the mole tunnels and around the bulbs and it worked for a little while, but now it's worn off I guess. I would very much like to find a nice, large black snake to relocate into our yard!

One row of the garden isn't doing well. Everything looks sickly in that spot, so I mixed up a fertilizer of banana and avocado peels mixed with coffee grounds two weeks ago and today applied another of compost mixed with powdered milk and Epsom salts. I also made a simple syrup spray with sugar and water and applied that to the tomatoes, peppers, squash, and peas we have in blossom to attract more fertilizing bees. We do have some tiny peas and tomatoes on the plants. I used our Amazon points to buy a new dual compost tumbler, "The Ultimate Soil Machine", and I happily anticipate the wonderful compost we will have in a few weeks.


Aldi has such great prices on pineapple we are eating it nearly as much as if we lived in the tropics. I saw a Pinterest tutorial on rooting the plants and I tried it. I have one top putting out roots and another trying to do so. I took this photo about a week ago; now the roots are long enough on the larger pineapple to plant! 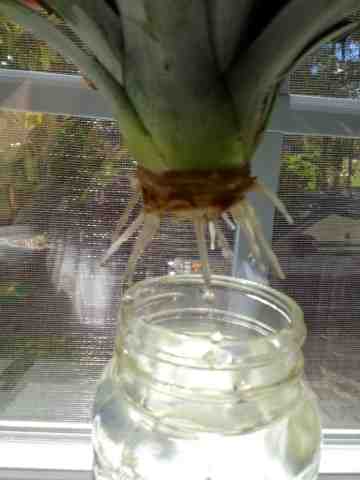 The roots after about a week.
I am really looking forward to it. We spent a week in the Dominican Republic a few years ago and toured a family farm which grew cinnamon, pineapple, cocoa, coffee, and vanilla. The lady of the house offered us samples of her fresh produce and the pineapples were so delicious. We bought some of all the spices for ourselves and our friends. I hope my pineapples will produce as well as my lemon and lime trees have if I set them outside for summer and bring them in for the winter.

I also tried growing the lettuce heads from scrap. These don't root; what you do is put the base in water and change the water each day. The center will send up new growth. The small growth is about two days' worth, and the larger is about a week old. At this point you must harvest the larger head by cutting off the new growth or it will all rot and die. I don't know that the small amount of new growth you get is worth having the jars sitting all over the place.

Over the holiday weekend we went swimming and discovered all the beach towels are missing. Heaven only knows where they are! We also finished painting the bonus room and setting up our new wall unit, so I will have photos for you soon. I was able to purchase an elliptical machine from a neighbor for a really good price ($75!), so I've been doing that along with swimming to try to keep from hurting my foot any more. The elliptical allows me to go fast and get my heart rate up like I'm running, but it doesn't put the strain on my foot that running does. I couldn't believe how out of shape I got over the winter when I went swimming. I only swam for about 40 minutes and I really felt it the next day! It's frustrating, after swimming every day last summer, to have to start all over again. I wish I had a pool to use in winter!

We also had to buy another new set of clothes for our teenager, who has outgrown everything again. He last outgrew all his clothes around February! I unpacked the other two kids' summer clothes from last year, so I feel like I'm drowning in outgrown clothes! The weather here was true to form and our yard sale was rained out after only a little while, so I'm selling much of that stuff as well. Watch my store, as I am selling these as fast as I can get them listed: http://stores.ebay.com/atelier-mandaline.

Since yesterday was a holiday I made a special treat for dinner: what I call my "Two Worlds" dumplings. I meant to take a picture of these after they were cooked for the blog, but they were gobbled up so fast I didn't get a chance. They look pretty much like any won ton or potsticker dumpling, though. The reason I call them "Two Worlds" is because of a funny coincidence, which requires a rather long backstory.

If you ever happen to find yourself in Zhengzhou, China (in Henan Province), do yourself a favor and go eat at the Holiday Inn Express hotel noodle shop on the first floor next to the lobby. You can watch the chef prepare handmade pulled noodles right when you order them. I highly recommend the delectable hand-pulled noodles with duck. Then make sure to order the green onion and pork dumplings, which are absolutely divine. I think they are called "Spring Dumplings" or maybe "Chive Dumplings" on the menu. As often happens when memory is obscured by the mist of time, these have become blurred in our minds, but we do know they were fabulous. I thought they were "water", or boiled dumplings, but Jerry is sure they were potstickers. I have tried many recipes to recreate them and I sometimes boil them in broth and other times cook them as potstickers.

In trying to recreate the Holiday Inn dumplings, I tried many recipes from my Chinese cookbooks, tweaking this or that, but I never could find just the right one. I, as many of you know, am half Scandinavian, Norwegian mostly. It happened a couple years ago that my parents' neighbor brought them an enormous bag of green onions from his farm in spring. This was such a large haul that, even though they gave me and two of my sisters bags of onions, it seemed like more than any of us could eat. I thought of making Kroppkakor: Swedish dumplings which are eaten with lingonberry jam for breakfast or with beer as an afternoon snack. As I read over the recipe, though, it occurred to me how much the filling of these dumplings resembled the Chinese dumplings we had in Zhengzhou. Kroppkakor are dumplings made with a potato dough, rather like gnocchi, and stuffed with an onion, ham, and bacon mixture. Normally you would use regular yellow onions, but since I had all the green onions I planned to use those. I found, though, that by switching the ham to sausage and the yellow onions to green and using won ton wrappers rather than potato dough I had a very fair approximation of the Zhengzhou dumplings. Over time I've revised the recipe a bit more. I now add a splash of soy sauce (I actually use the healthier Bragg's Liquid Aminos, which Jerry calls my "hippie" soy sauce). Sometimes I boil these in broth for won ton soup. Other times I cook them as potstickers, but no matter how I cook them and no matter how many I make there are never any leftovers! Although we can certainly stuff ourselves with one whole batch at a time, I usually freeze half before boiling or steaming. These take so much time to make, so it's really nice to just take them out of the freezer and whip them up. I hope to one day travel to Zhengzhou and taste the Spring Dumplings again, but in the mean time these are a good substitute!

8 oz (about 1 1/2 cups) nitrate-free bacon, finely chopped
1 pound green onions, finely chopped
1 pound country sausage (we like Neese's)
1 tsp crushed Allspice
1 TBSP or to taste Soy Sauce
2 packages commercial won ton wrappers
Cook bacon over medium heat about 2-4 minutes. Add onions, soy sauce, and allspice, and cook about 2  minutes or until onion begins to soften. Add sausage and mix in well. Cook another 2-4 minutes until sausage is cooked. Set aside to cool.
When filling has cooled, prepare each dumpling by placing a half tablespoon of filling on one side of the wrapper. Wet your finger and run it along the outer edge of the wrapper. Fold the wrapper into a triangle, and fold edge over again about 1/8 inch to seal the seam. Repeat until the filling is used up. This will take 1 and a half to two packages of wrappers.
Boil dumplings in broth for soup until the wrapper is clear. For potstickers, melt 1-2 TBSP coconut oil in skillet on medium-high heat. When the oil is hot enough to sizzle when you splash a bit of water on it, add the dumplings and cook until the underside begins to brown. Add 1/2 cup water to skillet, and lower temperature to medium-low. Cover and steam dumplings until the wrappers are somewhat transparent, about 5 minutes. Serve with soy sauce, or soy sauce mixed with wasabi for dipping, or serve with broth and add dumplings to broth as desired for soup. You may freeze the dumplings prior to cooking; to cook them from frozen do not thaw and add 3-5 minutes to the steaming or boiling time. 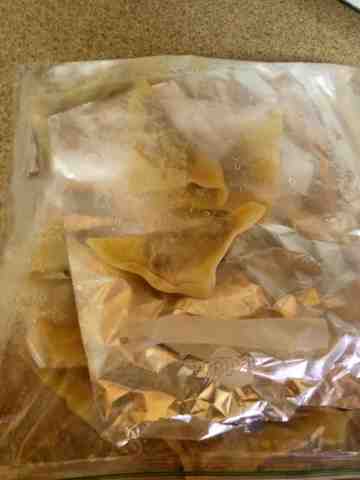 Here you see the frozen dumplings. Layer foil or wax paper between them to keep them from sticking together. When I make these I always serve broth with them. I use my 6-hour bone broth (chicken) but I add raw shrimp with shells on and more green onions to it and cook them in the broth. I strain out the shrimp and remove their shells and then add the shrimp back in. If I have Nori on hand I add strips of that as well. I season the broth with Chinese 5 Spice powder, Mirin or Sake, Soy Sauce, and salt and pepper.

We were lucky enough to have a lovely weekend. Although moving has been stressful, I feel very blessed to have found such a beautiful place to call home. We are really enjoying the parks and lake here in Denver.

Posted by Mandaline at 7:44 PM