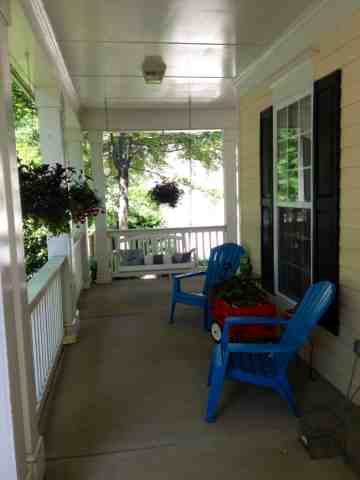 I've been working hard since my last post, but mainly on the house and yard. For those of you who have not been following this blog, in November we were relocated by my husband's employer and purchased a house. We soon found out from the neighbors this house sat empty for years, a fact not disclosed to us by the sellers. We've done a ton of work indoors and out, but have a great deal more waiting for us. 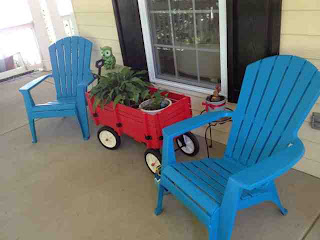 This week I decided to tackle the front porch. One of my favorite things about this house is the old-fashioned farmhouse porch. It's really wide and wraps around one side of the house. The weather is finally nice enough to sit outside, and the kids can play on the porch in our frequent rains. Even with furniture it's wide enough for them to skate or ride bikes and stuff. I had a good friend in Ohio who lived in a house with this type of porch and we would roller skate and play "Mother May I?" and all sorts of games even in rainstorms. I've always wanted a house with a porch like hers! 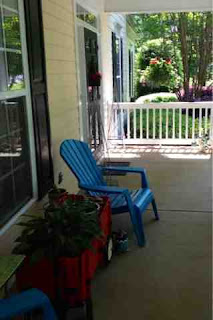 The porch came with the swing, and it's a nice one. I've had the wagon out as a focal point since we moved in. I found it out by the curb with the trash years ago. One of my hobbies is walking or driving around on trash day to pick through people's discarded junk. Unfortunately there's no trash service here so you have to hang around at the dump to indulge this pastime, and a bunch of old men already have that covered! Anyway, as a present for our 15th anniversary, Jerry restored it. I told him it's too nice now for the yard. I think it's sturdy enough the kids could play in it again. But I've really enjoyed decorating it for the seasons. At Christmas I set up a little Leland Cypress in it and decorated it as a Christmas tree. For Easter it held an egg tree. Now, I've moved my houseplants out to summer on the porch.

I really want to get some rocking chairs, but since it's not in the budget just yet I brought these turquoise Adirondack chairs up from the backyard. Turquoise and red is a favorite color combination of mine, and I think it really pops against the yellow. The silver plant supports and bird house were planned for the house we were building in Raleigh, which had gray and blue siding, but they still look nice with the yellow. My mom bought the hanging baskets for me as a birthday present. Eventually I mean to make it back to Mary Jo's for some outdoor fabric so I can re-cover the pillows on the swing. They are just bed pillows in regular fabric so right now I have to bring them in when it rains.

I also want to replace the yucky old lights and fan. I'd like to find some New Orleans style lanterns. We will be visiting NOLA in the fall so maybe I can get some then. Since we are in Carolina I also plan to paint the ceiling "haint" blue, said to keep both bugs and bad spirits away! I am considering staining the floor Charleston green or possibly painting it to look like patterned tile. 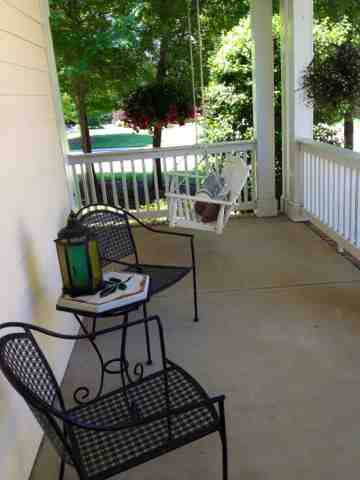 Over on this side of the porch I want to set up a little dining area. I have an old end table in the attic which I think is tall enough to eat from but small enough to take up little space. I plan to paint it, probably turquoise, and make a cloth for the top and then it can be used with these iron chairs. Somewhere around here I have more lanterns with citronella candles and when I find them I will make a hanging display with those. 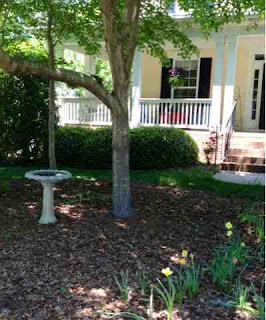 A few months back, you might remember we planted daffodil bulbs in the front yard natural area and I was worried they wouldn't come up because we got them on clearance and I thought we planted them too late. We had such a cold spring, though, they had time to grow and they are still blooming, which is pretty much unheard of in May. Usually these are done by the beginning of March around here! We set up the birdbath and I think it looks really nice under the trees with the flowers. I've also planted some lily-of-the-valley under the trees, and I'm thinking of putting in grape hyacinth as well so next years we will have the blue and yellow together. I think it looks like a park! 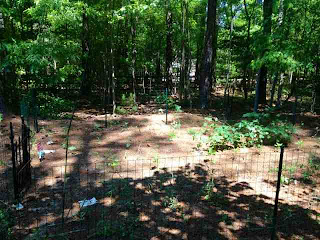 The vegetable garden is doing well still. My parents visited and my step-dad helped cut down a tree that blocked the light so now the vegetables can really thrive. We have some blueberries already on our brand-new bushes. I just planted raspberries and blackberries as well, but they haven't even leafed out yet. My four-year-old and I spotted this lizard. I thought of the Song of Solomon, "the voice of the turtle is heard in the land." I've never heard a turtle's voice and this lizard's call isn't audible to me either. 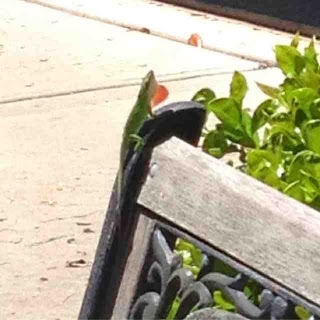 We have lizards all over the place, so I wonder at all the insect problems we have. I guess when the house was empty they just really got a good hold. The exterminators have been back each week because it turns out the ants were infesting the siding. Whenever we stop them one place they just start coming in another. I spent a good part of the day yesterday mixing up homemade fertilizers and insecticides. Yesterday I fixed Cuban pulled pork in mojo sauce for supper. the sauce is made with Cuban sour oranges, but since I didn't have any of those I subbed in lemons, limes, and mangoes. I made a spray to kill aphids on the roses out of the peels from the fruits. You chop these up in a food processor and mix them with water and baby shampoo and strain out the solids to use the liquid as a spray. Ants are also repelled by citrus, as well, so I put the solids I strained out all around the foundation of the house. We will see if it helps. I hope so, because I really don't like having people spraying poison all over every week. I've been awakened twice in the night by an ant crawling on my face, though, so I am willing to suspend my organic principles and get rid of them!
I spent all of Wednesday working in the yard, hauling branches, trimming, fertilizing, and planting and then I walked at night, so I ended up doing more than 10 miles over the course of the day. Then on Thursday I spent the day carrying books and putting them on shelves. Besides the garden we have been re-doing our bonus room with the new Ikea wall unit. I will post pictures of that room when I finish it. I felt pretty good Thursday and had another really active day. But today I'm feeling it, especially in my injured foot. I will try to take it easy today, although I don't know how. We are having a huge neighborhood yard sale. Upwards of 600 people attend. I will be offering the contents of my eBay store as well as furniture and stuff, so if you've been watching something in my store you might want to go ahead and buy it before 7 tonight! The link is: http://stores.ebay.com/atelier-mandaline.
Posted by Mandaline at 7:49 AM