﻿
Lest you all think I haven't been doing anything lately, today I'm going to detail all the various projects I have underway. I have been feeling bad about how slowly I've been getting the house done, but today we had a building inspector here (more on that later) and he was quite complimentary on all we've gotten finished in the short time we've been here. And so I thought about it, and it's true that, although we drove up here to close on the house a couple weeks earlier, we didn't actually move until the Monday after Thanksgiving. Since then we've had family to stay three times, unpacked most everything, went home for Christmas (as well as decorating for and hosting Christmas and New Year's), and gotten the kids started off in school and therapy.

Besides that, I've finally gotten started on the master bedroom. This is the room with which I was least happy when we viewed the house. It has nice big windows, but other than that I hate pretty much everything about it. The room came with curtains, but they are faded and one had started to shred apart from age, and besides that they are the wrong color (the wrong color, you will know if you're familiar with my other posts, is any color that's NOT blue!). So, I screwed my courage to the sticking place--nothing like a little Shakespeare in the morning!-- and went ahead and cut drapes from the very expensive fabric I bought at Mary Jo's. I was so worried about cutting the fabric, since it cost even more than the fabric for the bridesmaids' dresses my mom and I made for my wedding! It turned out well, though. I had exactly enough for eight very generous panels and little left over for some bed pillows. Jerry says I must be better at math than I give myself credit for, since I just looked at the windows and thought about how much I needed and it was just right. I think I've just made so many curtains by this time I can calculate yardage in my sleep!

I used the torn curtain as a pattern for the length of the drapes. I opened up the seams on the top and bottom and pinned them out flat. That roll you see in the photo is in the lining, not the drape itself. I used the entire width of the fabric, though, about 60 inches, for each panel because I want them really wide so they balloon out like ball gown skirts. 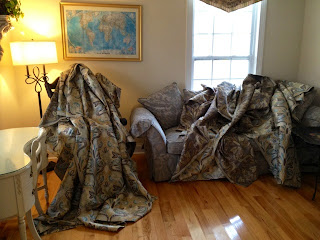 Here they are all finished and ready to hem. They look so posh! These are definitely a cut above our typical decor. I always make our curtains, but I usually do shades or some other fabric-saving style. I'm not doing any other curtains in this house, though. Although I complained a lot at the time about the homestager taking all the curtains and rugs from our old house, now I'm used to that spare look and I enjoy all the light streaming in, at least on the very rare occasions the sun is actually out here. All the childrens' bedrooms came with plantation shutters, so we can afford to splurge a bit on these. I wouldn't have spent so much if I'd know our washing machine was going to die, but I can't read the future!

I am still trying to decide whether to use the green linings from the existing curtains. I think the new fabric is thick enough that they won't show through, and the room is in the back of the house. I can't afford lining fabric! I did feel better recently when we visited a local decor shop and saw one pair of curtains marked down 50% off for $345! I certainly spent a great deal less than that!

Besides the drapes, we have a really big project going on: my office conversion! We are turning a walk-in storage attic into a little office for me. It's tiny, but better than working out of my bedroom as I've been doing for years now! I had a consultation with my eBay sales advisor last week and he was not at all happy with the length of time my store has been offline, so I got on the stick and listed some things. I'm sorry for the crass commercialism, but I do need to start selling again! I was also chided for not linking my store to my blog more often. So, here's the link: http://stores.ebay.com/atelier-mandaline. Everything I've listed so far is set up so you can make an offer, and I am accepting lower offers than you might expect since I was forced to miss the Christmas sales season. I have many of the dolls shown in this blog listed as well as other things like digital cameras and toys. I will have a lot more coming soon, as I get through my boxes. So, having the office done will be a big help to me. To save money we are going to paint and prime the room ourselves. I'll post pictures when it's done.

Of course, since construction started on the attic yesterday and our son had to go to the podiatrist, I woke up with a terrible migraine and "lights" in my eyes. If you don't get migraines, this is like the afterburn image you get for a second after someone takes a bright flash photo of your face, except it doesn't go away for a while. Jerry was nice enough to come home early from work and to bring me Chinese takeout wonton soup, as well as drive our son to his appointment. I can see today, but I'm still shaky. I think I have some sinus headache combined with migraine because all my teeth hurt too.

Wonton soup is one of my big comfort foods. When I was really little in California we would often eat at the Golden Dragon Chinese restaurant in our little town. I remember it well because they kept the "dragon", really some sort of big lizard, in an aquarium in the window and I was just enthralled. They had really good wonton soup, and that's what I always ordered. It's funny how eating a certain food can take you right back to a happy time. I guess it's lucky wonton soup is among the lighter Chinese-American fare! I say Chinese-American because I've noticed food in China is much less likely to be fried and usually contains a great deal more produce than that served as "Chinese" food here.

I've been thinking a lot about the town where I was born because another thing I am working on is planning a trip to the mountains here. For Christmas/Valentine's Day, Jerry gave me a trip to Asheville the weekend of February 13th, but I'm supposed to plan our activities. Someone once told me, "Those aren't real mountains!", in reference to Asheville, but the town always reminds me of my original town in California. It has the same sort of hippie vibe and the hills, of course. It seems quite as if it's in the real mountains to me. I guess, though, I was born in the foothills of the Rocky Mountains, so maybe Asheville's mountains aren't all that high! I am going to try to get a little good photography time in while we're there. I have been feeling like painting again recently, and what better subject than such a lovely part of the state?

There was a small mountain at the end of our street in California. I remember riding my little trike and feeling like, if I could just go a little further, I would run right into it. I pictured it in my mind like a giant mound of dirt dumped on the street as if by dump truck! Actually, you had to go up a little switchback dirt path near our house to climb onto the mountain. My dad would push me up there in a wheelbarrow (I guess at the time there weren't strollers for older children, just baby buggies). We always took a box of Domino sugar cubes to feed some horses we passed on the way. I loved to go on the mountain trail because we would often see quail mothers hurrying across the path, with all their little chicks following in a row. I loved those quick, cute little birds! One time, my parents were at a party and heard another guest telling a story about how one of his horses was allergic to sugar, but someone kept giving it to the horse and causing it to have all sorts of problems. They realized, guiltily, that we were the culprits! I don't believe they confessed, but after that we couldn't feed the horses anymore.

Anyway, I do have a lot going on, and fingers crossed this headache goes away so I'll have some posts about finished projects soon!
﻿