Today finds me still working on setting up the house, rather than any kind of creative endeavor. Weekend before last we traveled home for Christmas with our respective families, and while we were there we took in some cultural events. Jerry got his mother to watch the children on Friday night so we could go to the North Carolina Museum of Art to see the Edvard Munch exhibition. They have a wonderful collection of Munch's prints until February 10th. If you are at all able to attend I encourage you to do so. It is really an amazing collection to view in your own backyard!

Most art historians consider Munch's prints his finest work, even better than his paintings. He would keep working through a subject for a long time...for years, in many cases, and in many different media. He typically would write about a given subject, then paint it, then do an etching or lithograph or woodcut, or all of these. By the time he got to his final revision the subject was distilled to its most impactful, concise, and relevant treatment, so the final prints are typically very powerful.

Munch will just blow your mind if you haven't experienced his work before. I was thrilled to see the exhibit includes many of his writings along with the prints, and also shows the progression of most pieces from the initial painting to the final woodcut. I was especially excited to see his Madonna at the center of the exhibit. Although Munch is most popularly known The Scream, his Madonna has always been my favorite.

As far as I'm aware, Munch is the only artist to show the Madonna at the moment of conception. That fetus in the corner of the frame is the future baby Jesus. It's such a powerful thought, and so insightful, to imagine Mary at the very first moment she becomes a mother. Munch wrote about this as well. I am not quoting exactly, but he said this is the moment that forges the link between all the thousands of generations past to all those future generations to come. It gave me chills to imagine that. It is the very moment all parents have known and it is so much more important than we usually consider at the time. Mary portrayed as she was, as well, the divine and the profane enmeshed...who could give imagery to that idea more skillfully than Munch?

I do think Munch could have used some Prozac or something, but we are all pretty lucky he didn't have access to it and had to work through his demons on paper. I really hoped the museum had produced an exhibition poster to match the card so I could hang it in my bedroom with my Eve exhibition posters from Italy. I didn't see one though. It's too bad, because it would have looked awesome in there.


These posters are street posters for art exhibitions, one Florentine and one Venetian, from 1995. I was blessed not only to see these works in person, but since I worked as a graphic designer I was also able to locate the printer and purchase extras for only about $5 each. These street posters are plastered all over walls and buildings in Italy, as you've surely noticed if you've been there, but they are not usually sold at the exhibitions, so these are probably quite rare. I would never sell them, though, because they hold such wonderful memories of my time there. The Chagall exhibit was close enough to the ad agency where I worked two days a week that I was able to walk over to see it on my lunch break. They had Chagall's stained glass windows, which I'd only seen in black and white photos! Those are just awe-inspiring. If you ever get a chance to view them in person jump on it. That same day I saw Picasso's sketches for Guernica, along with many of the preliminary drawings for his other works.

Then, as I was lucky enough to be in the country for the Venezia Biennale I had to take the train to Venice to view it and was struck most powerfully by Franz Stuck's The Sin, featured on the poster. This is the one thing, I think, of all the many things I love about Italy, that ties me most to that country. On any given day, in almost any little town or big city, you can see Civilization's greatest achievements. Not only art, but so many things are on display there. The last time we visited, in 2009, we saw Galileo's notebooks at one museum and then happened on a little church showing many of Da Vinci's machines built according to his drawings. Many were life-sized and working. It was incredible. I used to spend every minute I wasn't at work walking around just LOOKING and soaking it in.

When I was looking for the Madonna poster Jerry pointed out that we don't really need another naked woman on the walls. We do have quite a bit of that, I suppose. I got the powder room downstairs finished last week and hung up a Fragonard, a Michelangelo (both in reproduction, of course) and then this figure study of my own:

I call this piece Rear View, which I think is funny but my mother thinks in awful. It is a reference to the drawing, obviously, but also to the experience. In figure drawing classes you always try to be early enough to get a good spot so you don't have just full-frontal nudity or a rear view like this one. But I was late to class that day, or too late to get a good spot, so it was a challenge to get a good piece out of it. Although this was just an exercise piece from a figure drawing class, it's my only work to ever hang in a museum. It was exhibited at CAM (the Contemporary Art Museum in Raleigh) in 2003. At that time they didn't have a building yet, so they borrowed an empty warehouse on East Martin Street, not at all a good part of town then. I remember I was scared to drop it off and pick it up! I had a toddler in tow, as I have for so many years. My last baby starts preschool this Fall and I'm freaking out a little, I think.

Besides the Munch exhibit, we went the same night to see Les Miserables the movie. This is my favorite musical by far and I've seen it on Broadway twice and in traveling shows pretty much every time it ever came to Raleigh, I think. I used to listen to the soundtrack so often I still know almost the entire thing by heart. I had the piano music in high school and I played it until it just fell to pieces. My friends and I would sing and sing and sing those songs! It had me reading Victor Hugo at 15, so there's something! I was scared to go see the movie because I worried they'd mess it up, but it was amazing. We stayed up after until 3AM afterwards talking to my sister about it. Then the next night we were up until midnight with my sister and brother-in-law watching the new Batman movie (though I don't remember that because Jerry was pouring the wine into my mother's huge goblets and there's no telling how much I drank. Too much, for sure!) Then the next night I went for a walk with my best friend, Cherre, and we stayed up until 2AM talking. Then we drove back here New Year's Eve and hosted my sister and her family for our annual Wii tournament. Ever since Just Dance came out it's been a dance-off more than anything.

When we got home from my parents' house with all our laundry we discovered our washing machine had stopped spinning, so all week I had to hand-scrub the laundry against the agitator and wring it out by hand. I used to wash my clothes in a bucket with a washboard in Italy, but washing for one person is quite a different thing than hand-washing for a family of five! Luckily, a new washer arrived Friday. Now that the laundry is easier, I hope this week to finally at least get started on some sewing.

I did get the opportunity to do a little more creative cooking than usual for lunch today. Jerry came home early and surprised me with some oysters, which I've been craving for weeks. Denver has a gas station that also sells meat and seafood. It looks a little questionable, but I've been wanting to try it, as they advertise fresh oysters. These certainly were fresh and so good! It was amazing to taste the ocean itself when we're so far away here. I was making bacon cheeseburger soup in the Crock Pot for dinner, and was frying the bacon and onions when Jerry arrived, so after I was finished I saved the bacon grease to fry up some of the oysters. Then we ate a couple raw, and the rest I broiled with garlic butter, lemon juice, fresh parsley, and sea salt. Delish!

I have to brag a little on the lemon juice. I got the lemon from my little tree, shown above. It is so lovely to pick a lemon right off the tree when you need one! It smelled so heavenly. And the juice! Just one lemon had enough for all the oysters, sauce, and for our water! 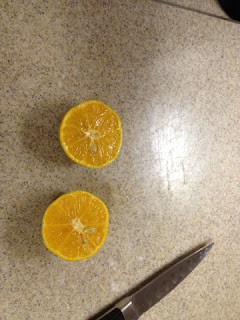 The color of the fresh lemons is just amazing, too. Look at that! Have you ever seen such glorious fruit? Besides the lemons, I am happy today because the sun is actually out. It's amazing what a difference it makes. Two nights ago the sky was clear and I got to run under the stars. It looked as though glitter was dashed across the firmament. We are close enough to the airport to see a lot of planes and their lights looked like heavenly bodies transversing the sky and reflecting in the water. I ran and ran and it felt to good to pound everything out against the pavement. Of course, by the next night I was slogging around in the rain again.

I served our oysters with garlic butter on the side and salad, and of course we had to open a bottle of Cupcake chardonnay. I felt like we were in Italy again, with the lemon scent and the decadence of drinking wine at midday! 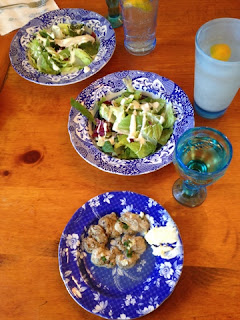 I hope the year is starting off well for you all, and that I am soon able to write about some new work. I spent a few hours reviewing my old posts the other night and this year I have a resolution to proofread more skillfully. I spell-check and spell-check and read and re-read these and then always later I find mistakes! It is so frustrating! My only defense is that I am always either working on the blog in the middle of the night or during the day while I am harassed to death by children. I have one chattering away at my elbow as I type this! I would never trade them for anything, though, no matter how persuasive.