In February I started an intense diet and exercise program that should have left me about 50 pounds lighter by now. I'm sorry to say, it didn't. At the time I'd been using essential oils and had gotten braces and lost 12 pounds in about 2 months. I was walking pretty regularly then, between three to five miles a day on average. I started my program by upping the amount of walking to eight to ten miles a day and then doing a 30 minute P90X workout with my husband most nights. I followed the recommended P90X diet pretty well. It features high protein and lots of whey protein shakes, especially the brand they sell. Although I did lose inches, I actually gained back all the weight I'd lost at the beginning of the year plus a little more. I tried to stay positive, because my inches were down, after all. At the beginning of my program I bought a too-snug shirt in the hopes of wearing it in our family photos in June. Well, June came and my shirt was pretty loose, so I was stoked! I felt great until I saw the photos. I look like one of those freakin' dancing hippos from Fantasia! This has been disappointing on many levels. Although I weighed less than I did last summer I look much heavier in this year's photos. This is partly because of the unfortunate happenstance that the outfit I picked looked nice in the mirror but hits in all the wrong places to look good in a photo. Lesson learned: from now on I'm having someone photograph any outfit I'm considering for the family portrait. However, after all my hard work and suffering, it was just too much. I basically threw in the towel.

Around the same time as the infamous photo shoot I stopped wearing my Body Bugg. This was not my choice; it was so hot in Hilton Head, South Carolina when we were on vacation the Velcro closure actually melted off my arm band. When I went to order a new band I found Jawbone bought out Body Media and has discontinued Body Buggs and their straps. Thanks a lot, Jawbone! That thing cost me $200 only about a year ago and now it's obsolete? Not cool. Anyway, I couldn't figure out how to fix the band so I stopped obsessively counting my steps and tracking my sleep and movement and caloric intake. I stopped weighing myself regularly, too. Swim team and summer travels and band camp carpool driving put an end to much of my regular exercise, although I did try to work in fun activities like swimming and walking around new cities and climbing water slide ladders. I also stopped "dieting." I went back to Mireille Guilliano's French Women Don't Get Fat principle of eating for pleasure, in which you just try to limit how much you eat and really enjoy whatever food you're craving.

Well, guess what? A couple weeks ago my mom and I went shopping in the same boutique where nothing fit this spring. The one too-tight XL size shirt I bought was the only regular size I could squeeze into and I just refuse to go up to plus sizes. This time, however, not only could I wear many of the regular clothes, I could wear many in size Large, so I found myself down two sizes in most things! I weighed myself and found I'd lost about 5 pounds since the last time I weighed a couple months ago. I've often wondered if I cause my body to swell up just because of all my stressing about my weight, and it looks as though that's the case.

Stress, even stress from body image and dieting and exercising, does cause your body to release cortisol. Cortisol has been linked to weight gain, especially in the abdomen, so maybe this relaxed plan is better for me. I am still not happy with my weight. I need to lose a lot more, especially from around my middle. I also notice I'm not as healthy as I could be. Years ago and again recently I was able to bring my terrible allergies under control largely with the help of super-nutritious food using Sally Fallon and Dr. Mary Enig's Health Recovery program from their Eat Fat, Lose Fat book and Dr. Atkins' Vita-Nutrient Solution. My allergies are still under control but I just spent the past week mostly in bed with a horrible cold. My 6-year-old and 10-year-old gave it to me but all they had were runny noses. I got hit with a racking cough, glands so swollen it hurts my jaw to yawn and chew, ear aches, aching joints, and a nose running like a faucet. My oils helped some, especially with the cough, but didn't eradicate it. I also feel like I've been flying off the handle with the kids over stupid stuff.

Weight gain, salt cravings (which I have with a vengeance), allergies and poor immunity, and inability to cope with stress are classic symptoms of adrenal fatigue.  The treatment for adrenal fatigue is to get off caffeine and sugar and to limit stress, including excessive exercise or dieting. So, even though I promised not to "diet" I am actually going to try the Fast and Easy Weight Loss plan from Eat Fat, Lose Fat. It promises to help you lose weight while eating 2000-2500 calories, way more than I eat now, so I'm interested! I will let you know how it goes. What I do remember from the Health Recovery plan is you have to make almost everything from scratch. Now that sprouted grains and coconut oil are easier to find there are a few packaged things I can buy, but not much. Luckily I mostly cook from scratch anyway.

I decided to put my husband and son on certain parts of the diet as well. In re-reading the book I once again went over the dangers of soft drinks. Both of them love "pop", as I grew up calling it. I don't like fizzy stuff, so it's not an addiction of mine. I ordered some kefir grains so I can make healthy soft drinks for them and maybe a wine replacement for me, but those won't arrive for a week. I decided to try to make some ginger ale, my husband's favorite, in the mean time. I think the recipe turned out pretty well! 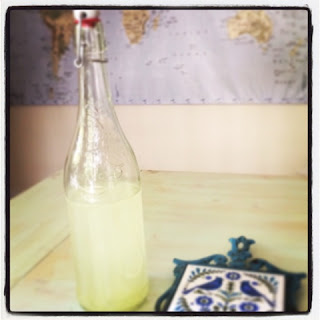 Start by grating your ginger as fine as possible. I used a microplane grater but you could use a powerful food processor as well.

Add the ginger, sweetener, and water to a pan and heat on a medium burner just until the sweetener melts and blends into the water.


Remove the mixture from the heat and allow to cool. When it has cooled completely add the essential oils.

Pour the sparkling water into the pan and stir gently to mix with the ginger syrup. Don't stir too vigorously as that will reduce the carbonation.

Decant into a covered glass container and refrigerate.


This isn't as fizzy as regular pop, so I hope my guys will still like it. I like it. Evidently when I was two years old my mother let me have a taste of her pop, which she was drinking through a straw. I didn't know how to use a straw and the pop came out of my nose. That was back in the 70s when the real sugar made pop much fizzier than it is now. I don't remember that incident but my mother says I would never touch anything carbonated after that and I've hated fizzy drinks as long as I can remember. I like the flavor of this pop, though. The real ginger makes it spicy and the oils give it a really fresh taste.

Last week, before I got sick, I made an oil I call "No More Buddha Belly", (using my Young living oils, of course) which I've been massaging on my stomach and thighs each morning and night. I didn't think to measure my stomach because for one thing I wasn't expecting very fast results, and for another I got so sick. I think I must have lost around four inches off my belly, however, because today I'm pretty comfortably wearing pants I couldn't fit into at all the last time I tried them on. Even though I've done almost nothing but sleep all week I lost two more pounds as well. I am still perfecting the belly oil, but it looks very promising. If it works on stretch marks, which it's supposed to reduce, I will be one very happy woman! When I get my recipe all worked out I will share it. You can order Young Living products and sign up as a member here.

Posted by Mandaline at 2:08 PM