Cissy steps out in style for her anniversary party. She looks just like a princess, and her outfit is out of this world. Her satin gown has a silver lace overlay and the entire scalloped hem is trimmed with rhinestones. A tulle stole wraps around her shoulders and closes with a floral accent. Her petticoat is full enough to stand on its own and the hem is trimmed with blue beading lace threaded with a blue satin ribbon. Silver shoes and a rhinestone trimmed silver crown, rhinestone necklace, ring, and bracelet and a silver bag complete the look.

However, if you'd seen Cissy just a few days ago you'd likely not recognize her. She needed eyelash replacement, stringing, split repair, wig maintenance, some paint touch-ups, and just a really good cleaning. I did all this for Cissy and she turned out really well.

My one goal this holiday weekend was to finish this doll. It turned out to be a challenge, because my husband's goal was to build a fire pit with a stone patio around it, a path, and to rebuild one end of our existing flagstone patio, which a previous owner inexplicably covered by a third with truckloads of dirt. We excavated each flagstone, moved the dirt from over them, carted 5.5 cubic yards of paver base and river rock from our driveway into the back yard, and built the firepit and patio. We nearly finished all that (we have one block that needs to be cut down to place in the fire ring) and I did get my doll done, so I'm sore and tired but victorious!


Cissy had scraping in her joints and even though I tried a couple types of paint and sealants, the paint starts scraping right away as soon as you move the legs or head. This is typical and not really very serious, since the scraping is covered by her clothes. You can position her head to hide the marks and the tulle stole attached to her dress helps conceal it further. The inside of the hips and one side of the neck had small splits I repaired. These repairs are visible if you look for them  but can also be hidden by positioning and clothing.

After split repair I cleaned and repaired Cissy's wig. I had to sew the hair back on the wig cap in spots and re-glue the wig around the hairline, but the golden blonde curls were still intact to the extent that I just finger curled them and arranged them and didn't have to do a new set. I replaced Cissy's eyelashes with long flutter lashes, intending to cut them short and straight as they originally would have been, but Cissy just looks so adorable with her long flirty lashes I couldn't bring myself to cut them. I decided I will cut them short at the request of the new owner but not before. I also traced over the original painted eyelashes and brows, which were very faint, refreshed the pale original blush, and sealed the remaining original eyeshadow to prevent it from rubbing off any further. Cissy retains her original hand and knee blush but it's pretty faint.

I dressed Cissy in the Madame Alexander 65th Anniversary Portrait ensemble #2295. The same number was used in the 1960s or 70s for a Scarlett O'Hara portrait doll as well. This incredible ensemble hearkens back to Madame Alexander's golden age and has all the detail you'd expect from an original, mint Cissy outfit. Beatrice Alexander chose this outfit to clothe her own self-portrait anniversary doll in 1988. It's a true example of the time; I wore an nearly identical bridesmaid's dress in my older sister's wedding right around that year, but it could also have come straight out of the 1950s. The accessories are dazzling and perfect with the dress. In this blue gown with floor length satin streamers in back and her tall tiara Cissy reminds me of the Norwegian Crown Princess, Mette-Marit.

No detail was overlooked, from head to toe. The silver shoes are bow tie trimmed and have lucite heels. The lace panties are trimmed with a blue ribbon. Cissy wears full panty hose rather than stockings. These are in perfect shape. Cissy's fingers have some chews but they are on the tips and not terribly noticeable. Cissy has the original Madame Alexander tag and my own signed tag as well. I gave her a new hair net to keep her style in place. 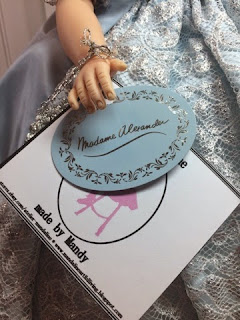 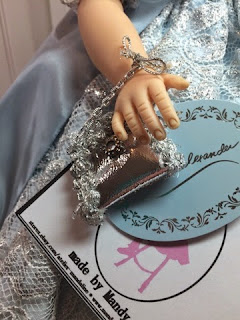 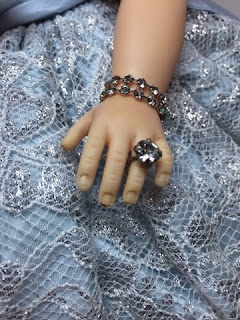 I am including the original #2295 box, as well as the shipper and pink tissue. This makes the package extremely heavy: about 8 pounds, but I think it's worth the cost to have the box to store the doll.


I hardly ever do this with new dolls, but I'm including Cissy in my Memorial Day sale, going on right now in Atelier Mandaline. The sale ends tomorrow, but it's a great opportunity to pick up an amazing Cissy at a discount, so I hope you'll check.