The Queen of Dolls, and Other Stories

On Saturday night I had to help the band boosters host a competition at our son's high school. I stayed up late Friday baking cookies for the boosters to sell, helped set up tables and ice chests and other concessions areas for two hours on Saturday morning, watched the competition from 6-10 PM, and then had to drive back and carpool the boys home after they helped clean up. I didn't get to bed until 2AM and I feel like I've spent the whole week since trying to recover! I used to stay up late like that all the time, but now I feel like it takes a year off my life!


Besides all the band stuff, I've had my nose to the grindstone for the past couple weeks trying to fill up my store. You might remember me mentioning we traveled up the mountains weekend before last for that week's band competition, and we made a day of it when we visited West Jefferson, a little town hosting an antique fair. We had a lovely time in West Jefferson, which was good because the weekend hadn't started off well. That Friday morning I opened the freezer to get some frozen berries to put in my smoothie and a nearly-full bottle of wine fell on me. Luckily it didn't break, or it would have cut my face all up, but it had maybe only 2 ounces used from it and the rest went everywhere. It was a giant mess first thing in the morning. I decided God must be telling me to give it up! Unfortunately, the powdered green drink mix I stocked up on about a year ago at home, where we had a Kroger, ran out the other day and I'd been using it as a substitute for wine in the evening. Sometimes I drink tart cherry juice instead, but that's also hard to find and really expensive here, so we have to buy that at Kroger when we're home. I miss Kroger. Then, on the way to the mountains Jerry got a speeding ticket and was in a terrible mood all afternoon.


So, I was happy to find the antique fair was worth it for me at least. First, I spotted an awesome rocking horse all painted with rosemaling. I just love stuff like that! I've been moving it from room to room trying to get the best effect. I do like it in front of the fireplace. I want to mimic this rosemaling for our kitchen chairs. We are nearly done with the dining room. We are going to take a break when we finish and then start on the kitchen set. I want turquoise chairs painted in rosemaling (Scandinavian decorative painting) and a pine with turquoise glaze for the table top and benches.

Then, we checked out a retro toy store in the downtown. This is great store, but I worry for it staying in business because the owner takes cash only; no credit cards. I spent all my cash on the rocking horse, but luckily Jerry had some, because in the sale bin I spotted a gorgeous Sweet Sue walker doll in the rarer 24 inch size. She has her original clothes and everything, so I snapped her right up!


Sweet Sue, by American Character, was advertised as "The Queen of Dolls". She came in several sizes, but I think this 2 foot size is the most majestic. I think she could wear real baby clothes! Sue has a lovely, sweet face and pretty hair you can style easily. This doll is a head-turning walker, meaning her head moves from side to side when you move her legs.


Sue is really in very good shape for her age. She had a slight separation starting in her crotch seam, but it hadn't gone all the way through. Her hands had some yellow stuff on them, and she just needed a good cleaning and hair set.

I repaired her seam with epoxy, painted her hands, and then brushed a thin coat of paint over her arms and torso so they would match, since they had discolored from age. Sue does still have some paint scraping in her joints, but this just scrapes up again as soon as you move her head, arms, or legs, so I just leave it most of the time. I gave Sue some new cheek and knee blush. I set her hair as close to the factory style as I could, so she looks as new as possible.


Sue's outfit has issues. I replaced the elastic in her bloomers' waist. The cuffs of the bloomers and shirt need it as well, but the fabric is so fragile I decided to leave it. I didn't want to risk tearing the fabric trying to rip out the old elastic. The flocking on Sue's dress is falling off, and I had to re-sew pretty much all the seams, making her dress rather tight. I replaced the ribbon in her bodice, as the original, which would have been a lace-trimmed hankie I think, is missing. I glued the sole of Sue's shoe where it was falling off. At this point, Sue's clothes are stable enough for display but if she will be handled much she will need a new outfit.


Besides Sweet Sue, I gave little Ginger, by Cosmopolitan, a makeover. Then I fixed up outfits for her and tiny Betsy McCall to get them ready to sell. Finally, I finished a Madame Alexander Katie for sale. The store should be filled sufficiently for a while so I can work on finishing other projects now. You can find the dolls and clothes pictured in my store: http://stores.ebay.com/atelier-mandaline.


We have the dining room suite to finish, and the whole house needs a good cleaning again. It's sad how long it takes to get it all clean and how short the time before it's all dirty again! I'm trying to get more efficient with our meal planning as well so we aren't eating processed food all the time. This weekend we have back to back band competitions on Saturday. Next week is my driving week, so of course the boys have to play at a football game Friday night, which typically means they aren't ready to go home until 11, and then they have to be back at school at 5 AM Saturday to head off to a competition. It doesn't leave much time for cooking! 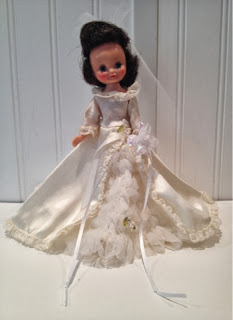 On Sunday I felt guilty about all the junk we've been eating, so I took some leftover bison and grass-fed organic beef meatloaf (pretty much the only thing I cooked from scratch all week), added extra onions and peppers and herbs from the garden, and used it as filling for scratch-made empanadas. I made the dough with cornmeal and baked them rather than frying them, so they were healthier than usual. Last night I made a processed mix, Kraft Recipe Makers or something like that; sort of upscale Hamburger Helper, a friend of mine gave us, but I cooked extra pasta so I can make homemade sauce for it later in the week. Today I have pork chops with peaches and plums, organic produce from our big garden at our old house, in the crock pot and have bread crumbs out hardening so I can make homemade stuffing, so I feel less guilty about the processed meal yesterday. I did add sautéed kale to the Recipe Mix for some kind of extra nutritional value! I will say, it was tasty and the kids ate it up; unusual, since kale is normally a hard sell. Later in the week I can use the leftover pork in fried rice or something like that, so it's sort of like having convenience food except homemade.

Posted by Mandaline at 1:24 PM