Well, we just said goodbye to Jerry, who is off on a business trip for the second week in a row. It's a miracle I'm still marginally sane, with three sick kids to myself! Besides that, we are having some trouble with our original movers, who have all our stuff in storage. They are refusing to return calls. We hope they are just mad that the relocation company is having us use a different company and not that they have lost or sold or stolen all our household goods! It is such a stressful time, I am glad to have my work to escape into and my dolls to keep me company. 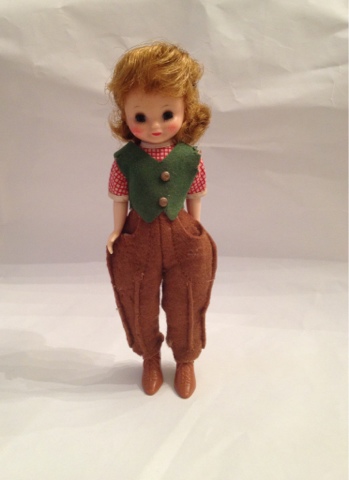 This weekend I have been working on the third Betsy doll from the Tale of Three Betsy's post. You might remember, this doll's wig was in such poor shape I wasn't sure I could fix it. She also needed restringing. Her body looked pretty good, so I put the better Betsy head I had on that good body. I first fixed crotch and knee splits on the body and painted them. I am not going into that much, since it looks pretty much the same as all the Betsy body repairs. Betsy can sit and stand alone now that she has her repairs. Her stringing and hips are very tight now. On to the wig repair; here is a close-up of the very deteriorated rubber skull cap: 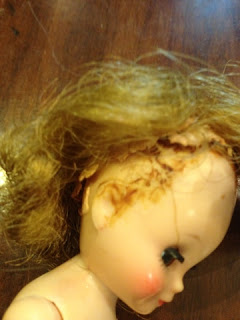 To try to repair the wig I first cleaned the face and head thoroughly all over and under the hair. Someone in the past had tried to glue the wig down and there was darkened glue residue all over the face. I was able to remove most of this. I washed the hair and set it, working very gently, as hunks of hair were starting to fall out of the rotten rubber cap. I broke and cut away any deteriorated rubber which had already lost its hair. At this point I needed to fix the split side seam of the head, as the hair would be glued down over it.
After the epoxy dried I sanded and painted it. You can hardly tell any repair was made! Then I applied Aleene's Tacky Glue under the edges of the skull cap and all around the edge of the face and pressed the hair down over it, securing it with a rubber band until it dried. This glue is able to be soaked off in hot water in case the entire wig ever needs replacing. When the hair was dry I arranged it to cover any old glue and bald spots and sprayed it into place. I replaced the one original barrette. Now the hair looks quite nice. It is better than I thought it would ever be! This doll cannot have her hair changed or brushed, though, because for the most part it is all glued into place. This repair should hold until the top of the skull cap starts to deteriorate, at which time the hair will all fall away. I think, however, that with this repair and proper storage the hair should look nice for a long time to come! 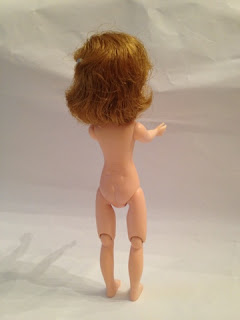 After the wig repair I moved on to Betsy's face. Now you might remember from my last Betsy post, this doll had really lovely high color face paint that was nearly perfect. The only flaw was one scratch in the cheek paint. All I had to do was rub a little more paint over the scratch to hide it and a bit more on the other cheek to make them look even. I also dabbed a bit of black on the eyelashes where the color had rubbed off the tips. This helps bring out Betsy's blue eyes. They are very pretty, a dark cornflower blue, and unusual since they aren't the normal gray color.
Some weeks ago I bought a Betsy doll with a lot of clothing. One of the pieces was the Pony Pals outfit from the 1950s by American Character. This outfit features a one-piece wool felt jodhpurs and red checked shirt romper with a faux suede vest. This one had a lot of moth damage to the jodhpurs and the vest was starting to flake at the edges. I was able to repair the pants using the needle felting technique I describe in the Loving Lenci post.
The best I could do color-wise was the camel-colored felt I use for the Nosy dogs. Since it isn't an exact match I felted the patches onto the inside. The repairs are visible but not all that noticeable. I couldn't really do anything about the vest, so it is quite fragile and should be handled with extreme care. I recommend it for display only and not to be taken on and off the doll a lot.
I found a pair of vintage Barbie boots that match the pants well. They don't fit very well, but well enough that they don't fall off and Betsy can stand alone wearing them. I think the whole ensemble looks pretty cute!
Of course, what would a Pony Pals outfit be without a pony? I briefly considered not including one, but you know I just can't stand to have things incomplete! Now, as far as I know, Betsy never had a pony in the original paper dolls series. Since she had a riding outfit, though, I decided a pony was in order. I found a free pattern on Pinterest. I am pretty sure I pinned it into my "Projects" or "Kids" board if you need to find it. I had the most beautiful cream-colored wool felt and mohair to use. I decided such a pretty and sweet white pony should be named "Sugar". My mom came in while I was working and was very surprised to see Sugar could stand on her legs without even being stuffed yet at that point. Mom doesn't sew with wool a lot. I explained how I love to use the wool felt because it is so malleable. You can stretch it and mold it almost like clay, and it is very strong as well. I just think Sugar is the cutest thing. I love her big black eyes and fuzzy, soft mane and tail! 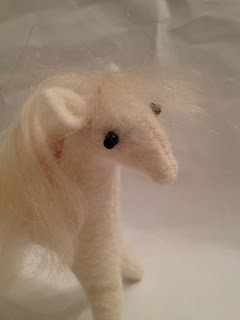 I couldn't leave Sugar without her own accessories, so I made her a little brown wool felt saddle embroidered with red flowers and a red elastic bridle with reins. Sugar is even strong enough to carry Betsy, although I should really have made her a bit bigger. They make and adorable display, though, and would also be fun toys to plays with now that Betsy is all fixed. I would take away the vest if this is to be a play doll, though. I'm sure are soon as my daughter sees these photos I'll have to make a Sugar for her as well!﻿﻿

This set is listed in Atelier Mandaline for a little lower price than the other sets, due to the poorer condition of the doll and outfit. It is still fixed well enough to be quite sturdy, though, and all the sets are also listed "Make Offer" so you can name your own price!
Posted by Mandaline at 10:53 AM