Today's post recounts the restoration of a tiny Mascotte doll. I bought an entire lot of dolls because I saw in the blurry photos this tiny little Lenci type Mascotte. I am not entirely sure it is a Lenci but it certainly is close. 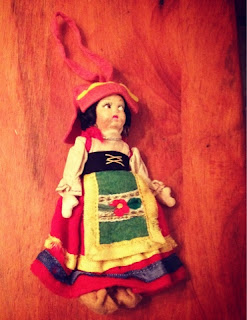 This doll is a true Mascotte. It has a hanging loop from its head. I suppose these dolls were intended to get as a souvenir in Italy and hang from your bag or your window or your rear view mirror when you got home. This particular doll certainly does look like she was used in that manner. She looks like she was dragged around on a backpack for years! She had many tears in her body and lots of rubs on her face. One of her eyes had completely rubbed away, leaving the gesso and felt underneath sticking out. The restoration of the doll was a long undertaking but this time I was able to use a new skill I've learned called needle felting.

Before I began the felting process, I had to clean the doll and repaint her face. To clean the doll I used artist's erasers. Never use water on a felt or pressed cloth doll! It can dissolve the sizing used to harden the face and it may also leave watermarks on the fabric. Instead, start very carefully rubbing the face with an artist gum eraser. You must be very gentle because the fragile old fabrics can tear. After you have rubbed the face dress and body with the gum eraser, switch to a kneaded rubber eraser. The kneaded rubber eraser will work a bit like silly putty, lifting the dirt and any foreign particles from the doll.

When the doll is clean you can go ahead and start painting. In this case I used acrylic artists paints even though the original doll would have been painted with oils. Because of the eye being rubbed off down to the gesso I was worried that oil paint might eventually eat through the head. The gesso acts as a seal and protects the fabric from the oil paint. I knocked down all the colors using Payne's grey paint in order to give them a vintage look. I was unable to get the eye exactly the same as the other one because the surface was no longer smooth. I did the best I could. I also touched up the blush on the cheeks. You can see some dots of paint on the face where I covered up rubs. They show up a lot more in the flash photos than they do in real life. 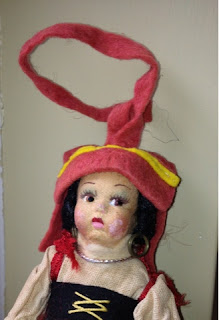 Once the paint was dry I began work restoring the skirt. The dolls wool skirt had basically been turned into lace by moths eating it over the years. I recently learned needle felting and so I decided to use that to restore the skirt. To needle felt you need to buy felting needles, a foam block or brush pad to felt into, and some wool roving to use in the felting process. You lay a piece of roving over the hole and stab the needle in and out through the roving into the felt. Make your needle stabs as close together as possible. This weaves the new material into the old. 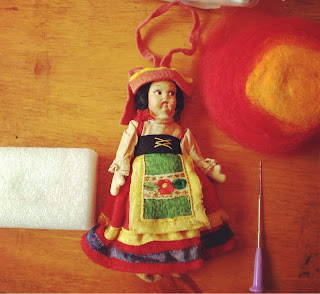 To felt into the skirt, I pushed the foam pad under the skirt and felted the red roving into it. In some places I was unable to get the felt pad under the skirt because the fabric was so delicate. I could not pull on it or it would tear. These spots were mostly along the waist. In that case I felted directly into the doll body. The clothes were already pinned into the dolls body so I don't think it would matter! This would be a wonderful way to fix felt doll skin with moth holes. I am not sure how well it would work to felt into the gessoed face but it is worth a try and I have seen it done! I would practice on a cheap doll first, not a Lenci! When I was done felting, I treated the ribbons on the costume with Fray Check. If you want to the costume to look completely new you could take the old ribbons off and put on new ones, but most people want their dolls to show a bit of their age. The Fray check will stop the deterioration and still show the hand of Time. 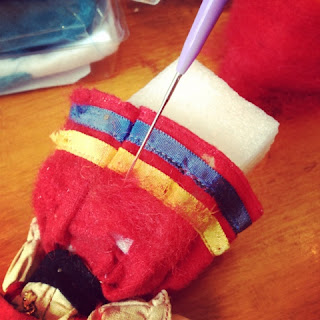 The fully restored doll looks lovely! As you can see she fits in the palm of my hand. 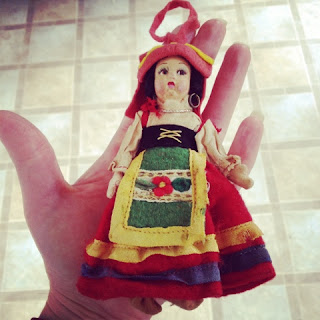 This is the smallest Mascotte I have ever seen. Now we get to the hard work of identifying the doll. Her costume is nearly identical to a larger Lenci Roma Mascotte I have seen documented on the Internet and listed on eBay. However, that doll has the googly eyed surprise face and this one does not. In this doll's favor are her very detailed costume with necklace, earrings, appliquéd flower and metallic thread embroidery. She even has tiny pantaloons and little shoes with contrast stitching. Also in her favor is the deep relief in her face. I have noticed through the years that Lenci dolls have much more deeply incised facial features than their competitors' dolls. Compare this little doll to another Mascotte by Eros. 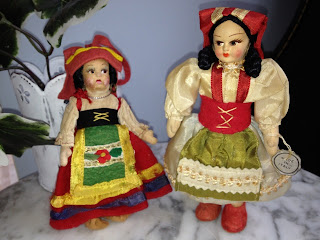 You can see the Eros doll has a flatter face, a less pouty expression, and no hanging loop. She is also larger with a less detailed costume. Notice the very dark upper lip on the newly restored Mascotte. That was a Lenci trademark. However, this doll also has some features not in favor for her being a Lenci. She does not wear constructed shoes; instead, her shoes are sort of tied around her ankles. She also is not marked with the Lenci name. However given the very disheveled condition this doll came to me in, it would not be surprising if her mark had worn off. This Mascotte has the famous side glancing eyes, but she does not have individually stitched fingers. I do not know if such a tiny doll would've had individual fingers, even one made by Lenci. So in fact, I really can't tell what brand this doll is. There were so many companies copying the Lenci dolls at the time. These little mascottes are perfect for a larger doll to hold, such as my daughter's Rothschild Edith!

I will say that this is a very rare doll in my opinion. I look every day for different Lenci and other felt dolls and I have never seen this one before. This is also an old doll, certainly pre-1950s. The fact that it has survived an obviously hard life is impressive and shows how well it was made. I am proud to have been able to restore her to some of her former glory. Keep watching for the series of Eros mascotte dolls I have coming up! 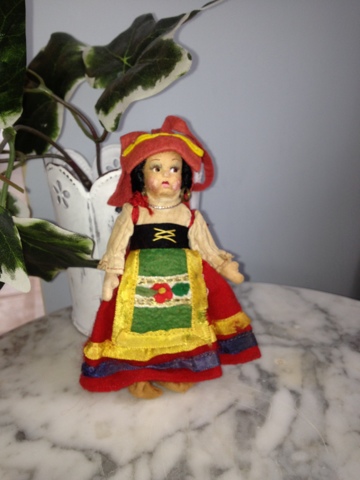 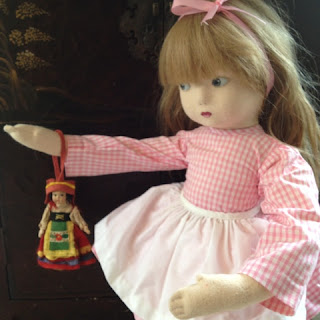 Posted by Mandaline at 9:05 AM